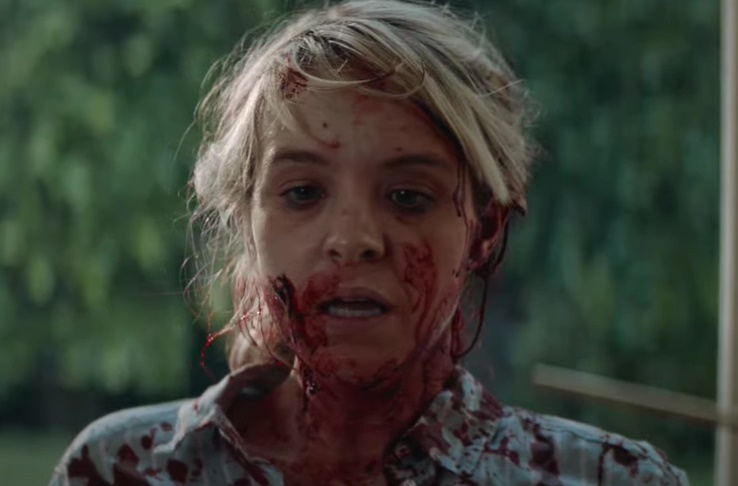 Lucky takes a well-known horror trope – the masked killer whose “dead” body vanishes when you turn your back – and puts it in a freshly relevant light.

A gaslight, if you will.

May (Brea Grant, who also wrote the screenplay) is a self-help author living in the California suburbs with her husband Ted (Dhruv Uday Singh). They are working to get past a rough patch in their marriage when a strange, persistent threat presents himself.

Every night, a masked man (Hunter C. Smith) tries to break in and kill May. She fights him off – sometimes spilling plenty of blood in the process – but he always seems to get away. The police are on the case, but they’re more interested in why Ted doesn’t appear to be around anymore.

Grant’s script is often smart and timely, and director Natasha Kermani peels enough layers successfully to hit a number of societal bullseyes. But an extended metaphor such as this is tough to keep constantly afloat, and some gaps of logic in the narrative work against the film’s subtlety and in turn, its overall power.

Grant and Kermani end up walking an entertaining line between subversive humor and metaphorical slasher. Lucky works best in that center, when May becomes a living example of that internet meme comparing what men and women do each day to avoid becoming a victim.

This is the final girl in a modern world of gaslighting and victim-shaming, where women form common bonds overs fears too often dismissed.

Just calm down, Honey, you’re lucky to be alive!