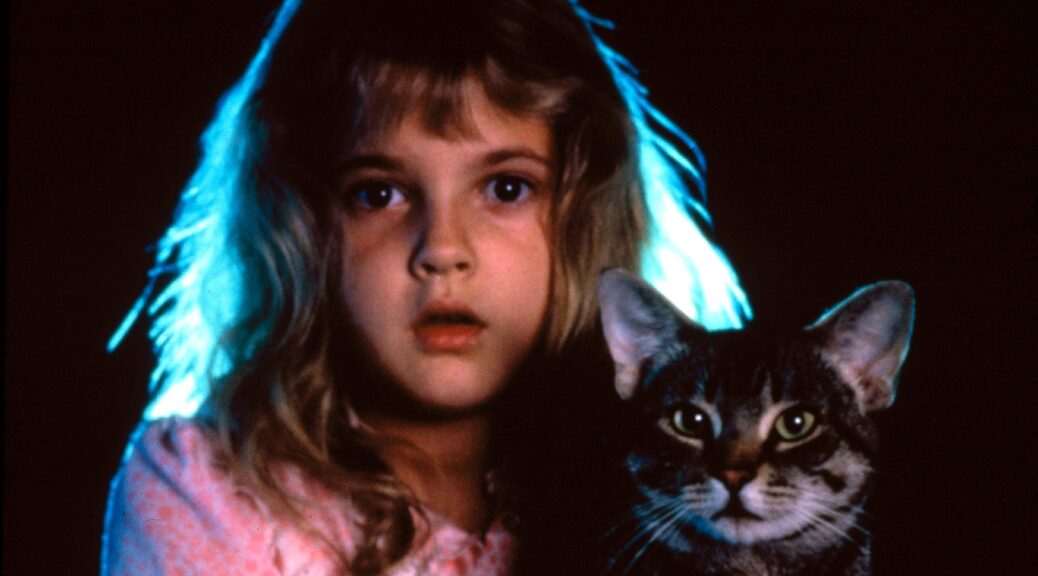 Generally speaking, when a horror filmmaker inserts a dog into their film, it’s because they know you don’t want anything bad to happen to that sweet pooch. They raise the stakes.

That or they expect the dog to tear a throat out and terrify an audience.

But that’s not really why they put cats into their films. Cats plot and menace. You can’t figure them out. They seem innocent, but then they dart between your feet just as you reach the top of the stairs. Plus you know they’ll eat your carcass, and they probably won’t even wait that long.

Here is our salute to cats in horror movies.

She’s not going to want to.

Stephen King wrote the screenplay for this anthology. Two of the shorts come from King’s published work, the third he scripted directly for the screen. A cat named General travels among the three tales.

General gets the most screentime in an episode with Drew Barrymore, who wants the cat to protect her from a little troll living in her bedroom walls. But the best of the tales follows Dick Morrison (James Woods) follows a 100% effective way to quit smoking.

It’s an effective set of tales and one of the better screen adaptations of King’s work.

Plus Bela Lugosi and Boris Karloff?! What is not to love? It looks great, as does Karloff, whose lisp is put to the most glorious use.

Loosely based on Poe’s The Black Cat – so loose in fact that it bears not a single moment’s resemblance to the short – the film introduces Lugosi’s Dr. Vitus Werdegast. He’s come to seek vengeance on Karloff’s mysterious Hjalmar Poelzig, if only Werdegast can overcome his all-consuming terror of cats!

The cat thing has almost nothing whatever to do with the actual plot of this movie, but who cares? What a weird, weird movie. So good!

Jacques Tourneur’s 1942 original explores that oh-so-common horror trope: women’s sexual hysteria. Beautiful Irena is afraid that if she has sex she will become a monster. And we know she’s evil because the tiny kitten her new beau brings her hisses at her.

It’s an often silly film and very dated, but there’s something unnerving in the shifts of power, the perversion the film finds in power. You see it in the way big cats are menaced by small cats.

Director Marjane Satrapi’s follow-up to her brilliant animated Persepolis is a sweet, moving, very black comedy about why medicine is not always the best medicine.

But Mr. Whiskers (evil cat, also Reynolds) thinks Jerry is a cold-blooded killer. And though Mr. Whiskers is OK with that, Jerry doesn’t want to believe it. So he should definitely not take his pills.