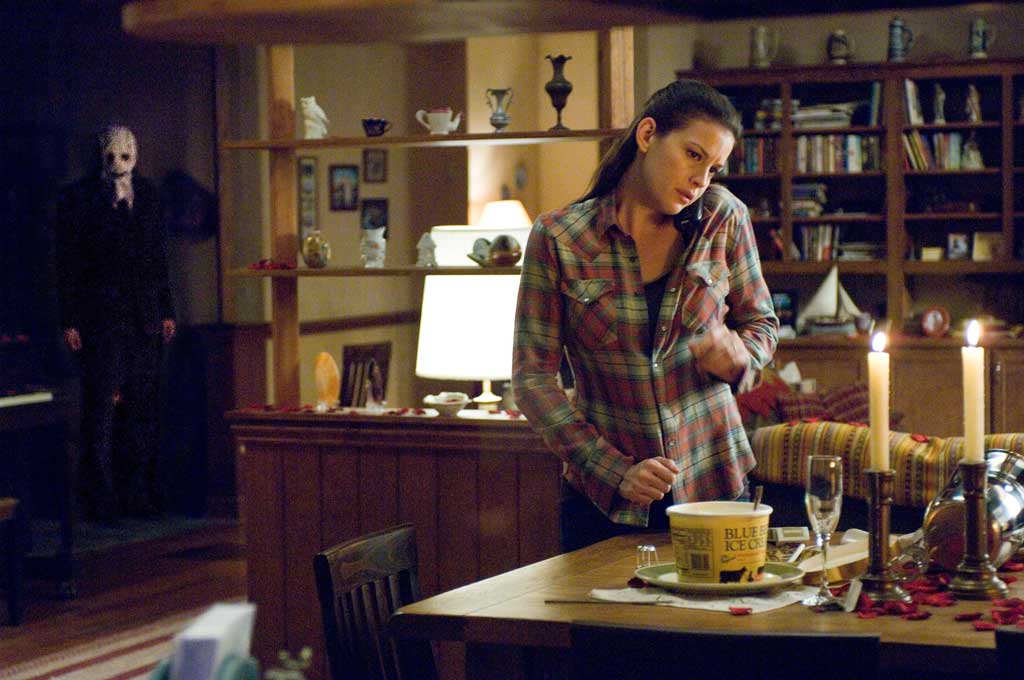 Who’s up for a little B&E? We are, that’s who! That particular fear of violation – that someone can harm you inside your own home – is universal enough that it hits a nerve with nearly everybody. And there are a lot of options, many of them really great, which means we had to leave a bunch behind. Sorry about that, but just to be fair, it’s a fuzzy math countdown. So, let’s hit it! Today we stroll through some of the most unsettling and affecting home invasion horror.

Don’t let the title fool you. While there is, indeed, a kidnapping in Miguel Angel Vivas’s Spanish film, the real horror is happening back at home.

It’s moving day, and a family is still unpacking boxes in their new home when three masked men break in. There are certainly familiar threads that run through the films on this list, but Kidnapped is terrifying because it is wholly believable.

The family feels real. The perpetrators seem real. No sadistic toying in Halloween masks, their goal is specific, and yet, these are not good men.

Viva allows tensions to build until they occasionally burst in fits of violence. And while the workaday motives of these villains may make other entries in the genre seem more colorful, there is something uncomfortable, even terrifying, in seeing a situation so believably articulated.

Writer/director Bryan Bertino creates an awful lot of terror in a gem of a horror flick that made an impression on horror fans. You can see that in the number of movies that stole the unsettling image of adults in children’s masks.

Bertino beautifully crafts his first act to ratchet up suspense, with lovely wide shots that allow so much to happen quietly in a frame. This is a home invasion film with an almost unbearable slow burn. Bertino creates an impenetrably terrifying atmosphere of not just helplessness, but sadistic game playing. The film recalls Michael Haneke’s brilliant Funny Games, as well as the French import Them, but Bertino roots the terror for his excruciating cat and mouse thriller firmly in American soil, with scratchy country blues on the turntable, freshly pressed Mormon youth on bicycles, and rusty Ford pick-ups hauling folks in kids’ Halloween masks.

For another look at what can happen when you’re trapped inside a house, there’s Ills/Them. Brisk, effective and terrifying, Them is among the most impressive horror flicks to rely on the savagery of adolescent boredom as its central conceit.

A French film set in Romania, Them follows Lucas and Clementine, a young couple still moving into the big rattling old house where they’ll stay while they’re working abroad. It will be a shorter trip than they’d originally planned.

Sam Peckinpah had a complicated relationship with his notion of manhood, and his notion of womanhood was even harder to define (some would say stomach). He explored these issues in many films, perhaps never more graphically than in 1971’s Straw Dogs.

A sincere product of its time, Peckinpah’s film swam the dangerous waters of the era’s culture clashes. Love it or hate it, you remember it.

Dustin Hoffman’s schlubby American mathematician David returns to his hot young wife’s (Susan George) hometown in rural England to encounter not-so-subtle attacks on his masculinity from the more traditionally manly townies, who remember his wife Amy as a hometown trophy they seem determined to reclaim.

Peckinpah’s film generates dread like few others. As is his way, he crafts heroes that are more flawed than heroic. Hoffman’s character is as cowardly as the townies suggest, and their taunting does not bring out his better side.

Essentially a Western, Straw Dogs leads to a phenomenally violent home invasion sequence that highlights the rotty human underbelly Peckinpah finds so appealing. Survival, but at what cost?

Michael Haneke is a genius, an amazing creator of tension. Everything he’s done deserves repeated viewing. With Funny Games, he makes it easy because he made it twice.

A family pulls into their vacation lake home to be quickly bothered by two young men in white gloves. Things deteriorate.

Haneke is hardly the first filmmaker to use adolescent boredom as a source of frightening possibility. Kubrick mined Anthony Burgess’s similar theme to icy perfection in A Clockwork Orange, perhaps the definitive work on the topic, but Haneke’s material refuses to follow conventions.

His teen thugs’ calm, bemused sadism leaves you both indignant and terrified as they put the family through a series of horrifying games. And several times, they (and Haneke) remind us that we are participating in this ugliness, too. That we’ve tuned in to see the family tormented. Sure, we root for them, but we came into this with the specific intention of seeing harm come to them. So, the villains rather insist that we play, too.