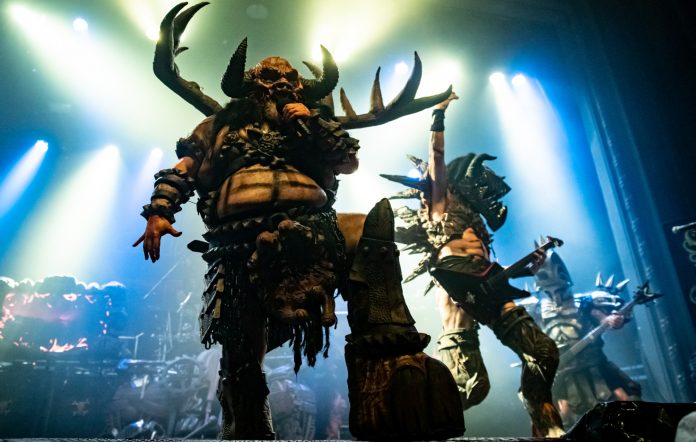 Back in the early 90s, I tended bar on the Ohio State University campus, at a place right beside a concert venue that Gwar would invade on a regular basis.

I can attest that fans lined up plenty early for a chance to be in the firing line of Gwar’s goo, and the kids poured out at show’s end with fists pumping after another slimy soaking.

But This Is GWAR wants you to know that goo was FDA approved, and the band behind it has traveled a long and sticky road that’s worth a closer look.

Director Scott Barber rolls out plenty of archival footage and first person interviews, taking us all the way back to the band’s creation by a group of misfit artists at Virginia Commonwealth University in the early 80s.

Hunter Jackson and Chuck Varga were art students who were told their fantasy-leaning stuff was dumb, so they planned to make a movie called Scumdogs of the Universe. Dave Brockie was singer and bassist for a local punk band named Death Piggy.

Then they all decided to put on costumes from the movie and open Death Piggy shows as a heavy metal band of barbarians that would sacrifice fake animals…and Gwar was born.

And when that opening band started drawing bigger crowds? Jackson, Brockie and a constantly rotating group of musicians adopted garish latex costumes and names like Flattis Maximus to set off as “barbarian interplanetary warlords” on a quest to search, spew and destroy.

Barber’s approach is well-rounded and determined, looking to put together not only a complete history of the band and the art collective that’s propelled it for decades, but also a tribute that would satisfy longtime fans.

Of course, you’ll find the arcs of excess and conflict that once drove Behind the Music to the heights of cliche, but this isn’t your normal band biopic simply because this band isn’t normal. And even if “the sickest band in the world” isn’t your jam, its history and the circus of talented people that keeps it running is just interesting.

But at just under two hours, the doc’s expanse errs more on the side of Gwar devotees (like Weird Al, one of the famous fans Barber features) than neophytes, and that’s probably as it should be.

Wear that goo as a badge of honor, This Is GWAR and this is for you.