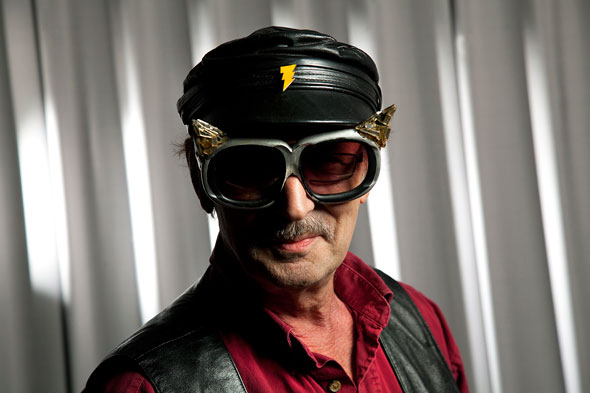 We are beyond thrilled that 6-time Emmy winner Fritz the Nite Owl and his director/producer Mike McGraner joined us this week to talk about the five most popular films from thier live midnight movie Nite Owl Theatre. Fritz hosted a late night movie show in Columbus from ’74 to ’91 and in 2010, he and McGraner took Fritz’s particular brand of entertainment to the public and online. Here we talk about the 5 films that got the best fan reaction over their years together.

No horror filmmaker could do more with a buck than Roger Corman. Back in 1960, he was still directing a lot of the shoestring budget flicks he produced, and the shiniest and most unexpected gem was this ode to bloodthirsty horticulture. In ’86, Frank Oz would make a campier film version of the stage musical , but the original is a spare, zany black comedy.

Clumsy, lovestruck Seymour (Jonathan Haze) just wants to impress his florist boss with the plant he’s growing at home in a coffee can. Unfortunately, that plant – Audrey, Jr. – is an unholy Venus Flytrap hybrid thirsty for human blood.

The comedy is broad and dated, relying on more than a few stereotypes for laughs, but the unique premise and memorable performances – especially Jack Nicholson’s cameo – keep it fun.

Back in ’07, Columbus native and screenwriter Brian Dougherty – hot off a couple well-received superhero screenplays – made the leap to directing with this comic-book inspired collection of related horror shorts.

The visually stunning effort follows holiday revelers in a homey small town. Brian Cox, as a “get off my lawn!” style old coot, is tormented by a small trick or treater. Meanwhile, Anna Paquin’s Red Riding Hood costume carries mean symbolism and Dylan Baker plays a more indecent character here than he did in Todd Solondz’s Happiness.

Dougherty’s fluid camera work, glorious use of color and sense of darkest humor combine in what amounts to what may be the very best anthology style horror movie.

You know the drill – teens on suburban Elm St. share nightmares, and one by one, these teens are not waking up. Not that their disbelieving parents care. When Tina woke one night, her nightgown shredded by Freddie’s razor fingers, her super-classy mother admonished, “Tina, hon, you gotta cut your fingernails or you gotta stop that kind of dreamin’. One or the other.”

Depositing a boogieman in your dreams, creating nightmares that will truly kill you, was a genius concept by writer/director Wes Craven because you can only stay awake for so long. It took everyone’s fear of nightmares to a more concrete level. Plus, it introduced the world to Johnny Depp.

The film suffers from a low budget and weak FX that date it – not to mention Heather Langenkamp’s weak performanc – but it’s still a great movie. That face that stretches through the wall is cool, the too-long out arms reaching out behind Tina are still scary. The nightmare images are apt, and the hopscotch chant and the vision of Freddie himself were not only refreshingly original but wildly creepy.

After a vagina-hand-sucker-beast attaches itself to your face, it gestates inside you, then tears through your innards. Then it grows exponentially, hides a second set of teeth, and bleeds acid. How much cooler could this possibly be?

Director Ridley Scott handled the film perfectly, emphasizing the tin can quality of the futuristic vessel. These people are simply not safe – they probably were in danger before bringing the afflicted John Hurt back on board. It’s dark in there, decaying and nasty – just like some moldy old mansion. The trick here is that these people- unlike the inhabitants of a haunted house – truly cannot go anywhere. Where would they go? They’re in space.

Much ado has been made, rightfully so, of the John Hurt Chest Explosion (I loved their early albums, before they went commercial). But Scott’s lingering camera leaves unsettling impressions in far simpler ways, starting with the shot of all those eggs.

What more can we possibly say about this movie?

Jack Nicholson outdoes himself. His early, veiled contempt blossoms into pure homicidal mania, and there’s something so wonderful about watching Nicholson slowly lose his mind. Between writer’s block, isolation, ghosts, alcohol withdrawal, midlife crisis, and “a momentary loss of muscular coordination,” the playfully sadistic creature lurking inside this husband and father emerges.

Hear the full conversation with Fritz on our Fright Club podcast.

Check out Fritz’s schedule, grab some episodes and merch at fritzlives.com You can also like him on FB @ Fritz the Nite Owl and on Twitter @niteowltheatre.