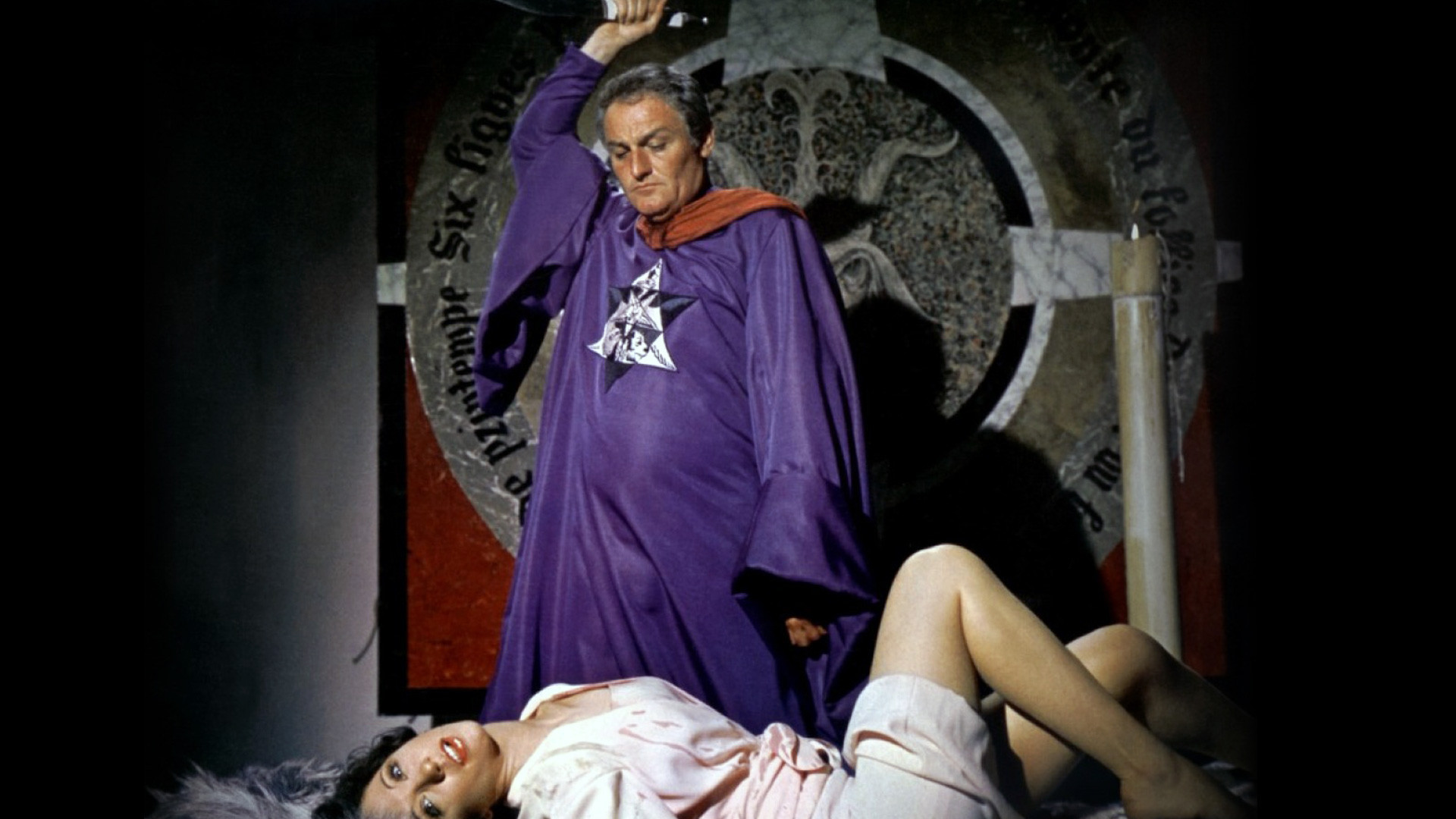 With more than 200 films to their credit, there are almost too many directions you can take when whittling down the best in Hammer horror. Ingrid Pitt could have her own countdown, and fans of the sultrier side of Hammer may be disappointed with this countdown. Fans of Terence Fisher should be pleased, though, but there are still many other films in their repertoire worthy of note, which is why Phantom Dark Dave joins us with his own list!

We open on Christopher Lee, tall and brooding, his hair slicked back and his goatee dark. He is the picture of Luciferian evil. But he’s the good guy, which is just one of the ways the film toys with you.

Lee is the wealthy, occult-intrigued de Richleau, and he’s trying—God help him!—to save the life of his young friend whose very soul is in the hands of the evil Mocata. (Rocky Horror’s Charles Gray, which, let’s be honest, may be why we love this movie. The man has no neck! It’s just a jump to the left! We digress.)

Well, if you want loads of extreme close-ups of Charles Gray’s evil looking eyes, then you are in luck!

It turns out, we have kind of a thing for Terence Fisher. Did not even know that until we started working on this list.

In this late-life sequel in Hammer’s Frankenstein franchise, the idea of the female equivalent gets upended in sometimes fascinating ways. The film’s prelude, as a little boy sneaks to watch his drunken father’s execution, sets the stage for a surprisingly touching yet moralistically ambiguous film. Hooray!

Yes, Hammer dried this well up, returning to the Frankenstein tale for sequels and re-toolings throughout the sixties and into the seventies. One constant – Cushing – never fails the picture. Committed to his evil doctor – whom he based on the real-life British Dr. Knox he would later portray in earnest in 1960’s Flesh and the Fiends – Cushing excels where the films around him fail.

This time, it’s the human soul (as well, of course, as the idea of the ideal woman) that preoccupies the doctor and the film. It’s a topic that generates surprisingly little traction in the world’s many Frankenstein efforts, and though this one is hardly flawless, it’s still consistently intriguing.

All bubbling potions and bunsen burners, Cushing’s laboratory (don’t forget to pronounce that middle ‘o’) is as fine a home to unholy alchemy as any. Jovially laissez-faire in matters of a moral nature, his sinister acts in the name of science are well played.

Cushing’s mad doctor is, at heart, a spoiled child. His behavior is outrageous, repugnant, but fascinating.

Christopher Lee made a fantastic Dracula – all elegance, height and menace. As Frankenstein’s monster, he’s rotty flesh, dead eye and sutures. Nasty! But the film’s real moment of genius was in making the doctor such a nonplussed agent of evil.

The great, sultry, unseemly Oliver Reed makes his big screen debut in this one as Leon, the stricken ward of Spanish wealth with a hairy, toothy secret. So, that is awesome, but it is hardly the most interesting thing about this Terence Fisher movie.

Set in 18th Century Spain, the film opens on a cruel nobleman’s imprisonment of a beggar, who rots in a dungeon for decades, his only reminder of humanity the jailer and his lovely mute daughter. Naturally, that daughter is nearly raped by the nobleman, tossed into prison, and subsequently raped by the beggar. The territory is about as dark as Hammer gets, and it raises a lot of questions. Like, why is his offspring a werewolf?

Never explained, but a wealthy man takes pity on the dying girl’s offspring, raises him up and protects him from his own darker self. This is where Oliver Reed shines, because very few actors were ever more convincing when it came to the idea that they had unsettling impulses.

Fisher’s real fascination here is just that duality of man, and with Hammer flourish and Reed’s overacting, he makes a big splash in investigating it.

Six foot 5 and sporting that elegant yet sinister baritone, Lee cuts by far the most intimidating figure of the lot as Dracula. Director Terence Fisher (what?!) uses that to the film’s advantage by developing a far more vicious, brutal vampire than what we’d seen previously.

Still, the film is about seduction, though, which gives Lee’s brute force an unseemly thrill. Unlike so many victims in other vampire tales, it’s not just that Melissa Stribling’s Mina is helpless to stop Dracula’s penetration. She’s in league. She wants it.