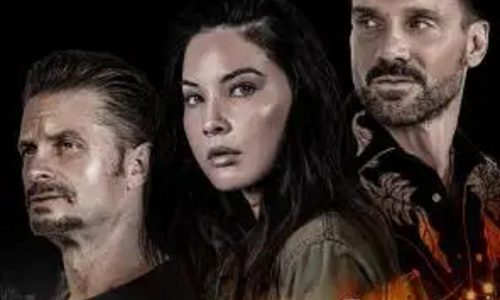 Opening his film with a quote from Charles Dickens, and closing it with a statistic about foster care, director/co-writer Michele Civetta wants us to know he has serious issues on his mind.

There are children out there hurting. If no one cares enough to help them, there’s little hope of breaking a sad cycle of dysfunction.

True enough, and fair enough. The problem is the 90 minutes of heavy handed cliche that fall between quote and quotient.

Shea Whigham pulls the weight here as Parker, a social worker in St. Louis who’s – you guessed it – battling some personal demons. After fighting his way out of a troubled childhood via a promising boxing career, Parker now grapples with booze and blow, looking for redemption through his caseload of damaged souls.

Parker is particularly drawn to Ashley (Taegen Burns), a bright young teen whose mother Dahlia (Olivia Munn) requires frequent checkups to keep on the straight and narrow. Her path gets rockier when Ashley’s father Mike (Zach Avery) comes home from prison a bit earlier than expected.

If Mike can give his boss “The Duke” (Frank Grillo) one last big score, he’ll be set up with a cushy job running some strip joint instead of risking his life in the streets.

Just one more, then he’s out! That always goes exactly as planned, right?

It’s great to see the veteran support player Whigham get a lead role, but the script doesn’t give him – or anyone else – much chance to develop a character with any authentic layers. True, social worker as avenging ass-kicker is a wrinkle, but nearly every other role is either interchangeable with countless other crime dramas or a familiar face (Keith David, Taryn Manning) in a distracting cameo.

Whigham, Munn and even the legendary Bruce Dern (as Parker’s estranged father) can’t do much to elevate the material, or the film’s occasional slapped-together feel (at least two dialog dubs are badly mismatched).

And once even the core message about the social safety net picks up sidebars on the military industrial complex and government-sponsored drug trafficking, The Gateway becomes an overwrought and overwritten mess leading to little that is satisfying.

The Gateway hits VOD on Friday