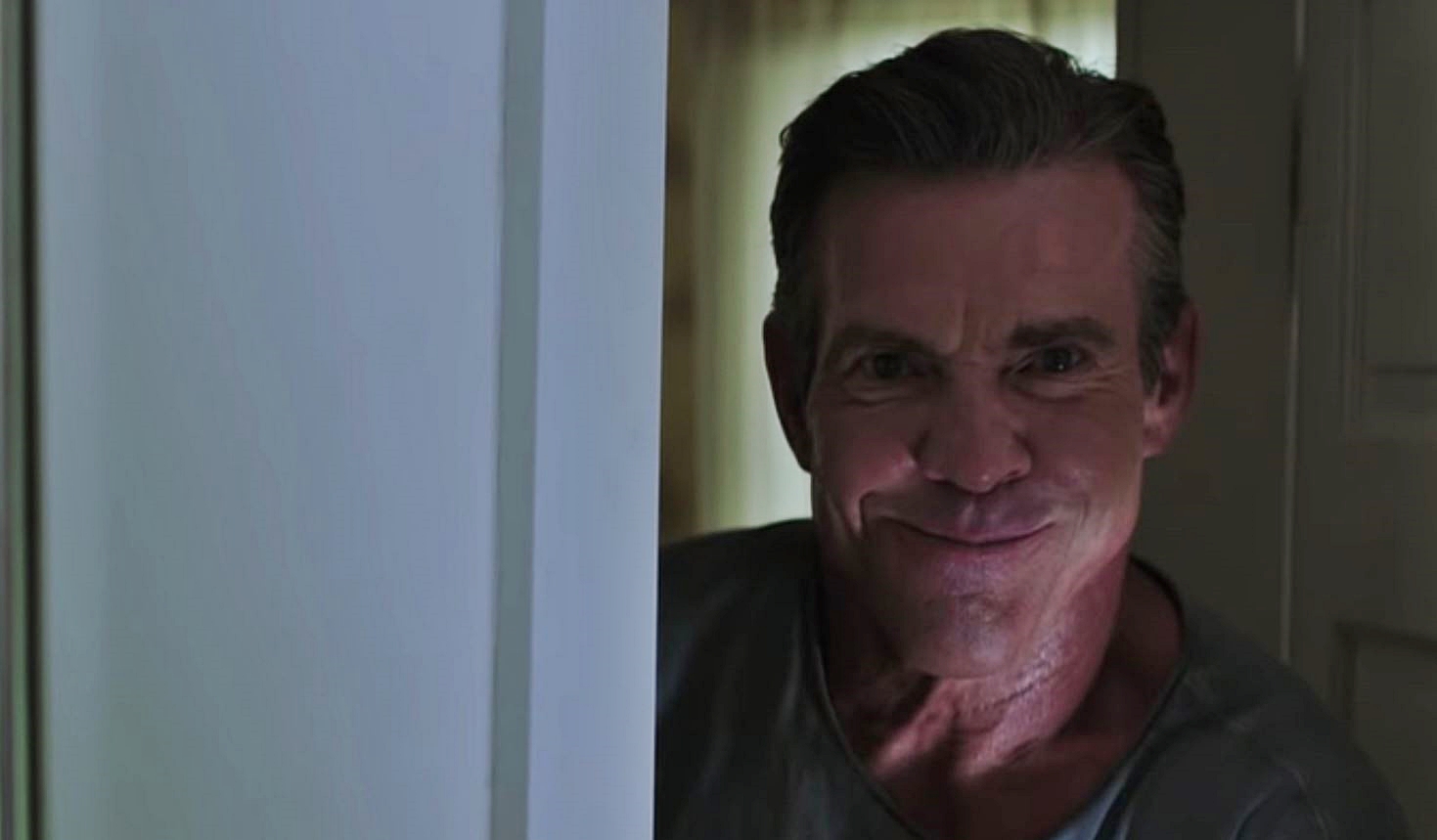 If you caught Dennis Quaid creeping around your house on numerous occasions, would you be scared, or just figure he was bringing over some mac and cheese?

Quaid might be one of the ultimate likable dudes, and his playing waaay against type is one of promising threads that The Intruder squanders in its warmed over dish of jump scares and borrowed ideas.

Beautiful couple Scott (Michael Ealy) and Annie (Meagan Good) are living the good life in San Francisco, but Annie feels it’s time they move to the country and start a family. She finds her dream house at the Napa Valley home of Charlie Peck (Quaid), and as quickly as you can say “overly rushed setup,” they’re moving in.

Charlie says he’s selling to head South, so why is he still coming over to mow the lawn, assist with the Christmas decorations, and find reasons to be alone with Annie?

Whaddya bet he’s not really retiring to Florida, or that some guy at Scott’s office would like nothing better than dig into Charlie’s past to find what he’s hiding?

Director Deon Taylor (Traffik) and writer David Loughery (Lakeview Terrace) are both treading familiar ground, too much on autopilot to successfully mine the contrasts they introduce.

That’s plenty to chew on, but everyone goes hungry while characters make one idiotic decision after another on the subtlety-free ride to a finale lifted verbatim from a 90s thriller.

At some point, Taylor and Loughery needed to chose a path: logical, layered tension or unhinged, over-the-top fun.

It’s clearly evident which one Quaid wanted, but both he and the film end up undecided on the remodeling plans. Like that old, musty spare room with the bad wallpaper, The Intruder is a little creepy, too often unintentionally funny and in need of some work.

A mid-budget action thriller sees a handsome couple alone in an isolated home suddenly at the mercy of a biker gang.

Well, hell, this could be just about any mid-to-low budget thriller from the Seventies. Writer/director Deon Taylor borrows some of the ideas and themes from Seventies exploitation, updating it with a more contemporary style, slicker editing, modern problems and Paula Patton.

Patton plays Brea, a Seattle journalist who may have just lost her job because she’s too interested in telling the whole story. She’s just not one to turn a piece around quickly enough for today’s 24/7 news cycle.

She takes her mind off things with the surprise trip her boyfriend (Omar Epps) planned.

Traffik builds slowly with overly familiar tension, and Taylor makes a handful of interesting choices. These bikers aren’t just racist and bloodthirsty (although they are that). They are the goons of an international human trafficking organization and Brea, her boyfriend and this pointless second couple are in for some real trouble.

The women in Taylor’s film get every opportunity to make a difference, participate in the action and make reasonable decisions—definitely not a staple of Seventies exploitation. Problematically, Paula Patton cannot act.

A lot of action stars can’t, that’s true, but the film really depends upon Patton’s emotional journey and the woman cannot emote.

Taylor makes up for that by simply ogling her body with his camera for 90 minutes. I have never in my life seen a film more preoccupied by one performer’s nipples than Traffik. It would be problematic anywhere, but in a movie where the heroine hopes to save women from sex slavery, it feels wildly wrong-headed.

Given a couple of turns in the script and the film’s overall Seventies vibe, you wonder whether Taylor sees Patton as the new Pam Grier.

The film is not terrible. Dawn Olivieri’s turn as a truck stop druggie will haunt you, and even though you basically know what’s coming, Taylor’s game direction keeps you interested nonetheless. There are a couple of decent action sequences—nothing to write home about—and the pace is quick.

Take Paula Patton (and Taylor’s leering filming of her) out of the movie and it’s not a bad little piece of throwback exploitation.