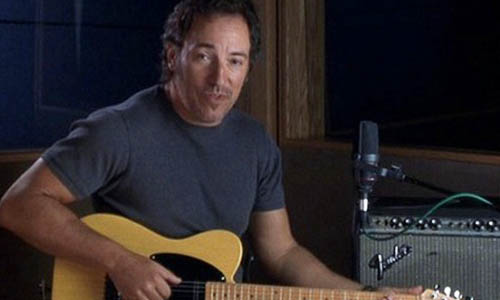 Maybe you just can’t wait until Tuesday’s screening of Springsteen and I, or maybe the E Street doc is not showing near you. Well, if you are suffering from a Springsteen movie jones, we have the cure.

The Boss has lent his talents – and in one case, his actual person – to bunches of films. Most of them are even worth seeing.

In concert, Springsteen has recalled the tale that led him to pen the song Light of Day, which Joan Jett sings for the film of the same name. Filmmaker Paul Schrader had sent him a screenplay entitled Born in the USA – a title Bruce stole outright for this other little song he’d been working on. In return, Springsteen wrote the rocking number that may be the only non-ridiculous thing about Schrader’s film.

John Sayles’s weird romance turned noir turned adventure/thriller will keep you guessing. I suppose it’s only fair, then, that you may not immediately link the film’s song Lift Me Up to Springsteen. Singing in an unusual (for that time in his career, anyway) falsetto, Springsteen’s lyrics underscore the characters’ beleaguered search for redemption.

Mickey Rourke’s succinct and frighteningly honest characterization of a performer with a shelf life found a lovely, lyrical mirror in Springsteen’s song of the same name.

Springsteen’s The River joins a slew of kick ass songs on the soundtrack, but High Fidelity boasts something the rest of these flicks do not. Bruce himself shows up, guitar in hand, to offer advice to the romantically misguided Rob Gordon (John Cusack).