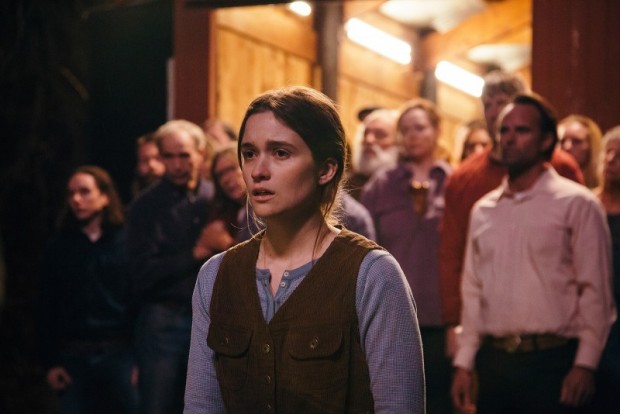 When a way of life not only makes you a social outcast, but presents increasing dangers to those closest to you, what would motivate you to cling even tighter?

It’s a premise that could easily lead to vilification, so credit filmmakers Britt Poulton and Dan Madison Savage for taking Them That Follow in a more resonant direction. Rather than relying on lazy condescension, they want to probe the psychological politics of control.

Mara (Alice Englert) is the pastor’s daughter in a small community of snake handlers in the Appalachian mountains. Her father Lemuel (Walton Goggins) preaches strict adherence to the Word, which requires frequent tests of faith, subjugation of women and shunning the ways of the material world.

But Mara’s interest is starting to move beyond the mountain, raising the suspicions of the stern Sister Slaughter (Olivia Coleman, recent Oscar-winner for The Favourite) and sparking the curiosity of her best friend Dilly (Kaitlyn Dever).

“Who you choose, girl, chooses your whole life,” Sister Slaughter cautions Mara. And Mara will soon face choices that will alter several lives.

Them That Follow benefits from a beautifully rustic production design and an unhurried pace, building earnest layers of authenticity that mirror a sublime ensemble cast (which includes a nice dramatic turn from comic Jim Gaffigan).

Poulton and Savage are not here to mock religious beliefs, but rather to question the motives of leaders who seek control by division. Followers are belittled by proxy (“They look down on you!”) while leaders make unhealthy demands and wash their hands of culpability (“It’s God’s law, not mine”).

While the film’s concerns are especially timely now, a third act that seems rushed and overly tidy loosens the grip of Them That Follow. The tail here has more bite than the head, but the serpent still deserves respect.