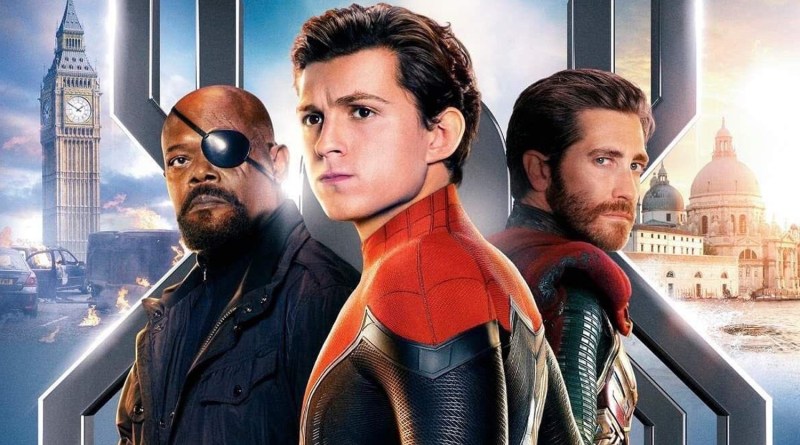 Spider-Man: Far From Home has more than a webshooter up its sleeve.

One part reflection on the state of MCU, one part statement on our cartoonishly ridiculous world today, one part charming coming-of-age tale, the latest Spidey episode almost takes on more than it can carry. But return writers Chris McKenna and Erik Sommers embrace franchise strengths while betting director Jon Watts, also back from Homecoming, can maneuver slick surprises.

The wager pays off, and Far From Home winds up being a film that feels a bit campy for a while, but in retrospect succeeds precisely because of those early over-the-top moments.

Peter Parker (the immeasurably charming Tom Holland), having returned from oblivion (Infinity War), then universal salvation and personal loss (Endgame), would like a vacation. The poor kid just wants to take a trip abroad with his class and get a little closer to his crush MJ (Zendaya).

Not with Nick Fury (Samuel L. Jackson) following him across the globe, or the surprise appearance of Quentin Beck aka Mysterio (Jake Gyllenhaal), a new monster-slayer from another Earthly dimension.

“You mean there really is a multi-verse?”

That’s a nice nod to the stellar animated Spidey adventure from last year, and a big clue about how self-aware this chapter is determined to be. The front and center ponderings about what Peter (and by extension, Marvel) is going to do now threaten to collapse the film from self-absorption.

To the rescue: a jarring and unexpected pivot, and that wonderfully youthful vibe that now has one eye on growing up.

Interestingly, Tony Stark fills in for the guilt-inducing father figure that’s always been missing from this iteration of Peter Parker’s tale. Without Uncle Ben, Stark becomes that hallowed hero whose shadow threatens to obliterate the fledgling Avenger.

Peter’s still a teenager, after all, and Homecoming soared from embracing that fact, and from Holland’s ability to sell it in all its wide-eyed and awkward glory.

He still does, but now our hero’s naiveté is shaken by some mighty timely lessons. Number one: “It’s easy to fool people when they’re already fooling themselves.”

Not exactly subtle, but fitting for the world of a distracted teen. And for kids of all ages, there’s no denying how cathartic it is to see world leaders, their media lapdogs and widespread buffoonery on blast and blasted across the largest screens, where good will inevitably conquer.

As fun and funny as this keep-you-guessing Eurotrip is, its core is driven by a simple search for truth. And don’t leave early, because that search doesn’t stop until Far From Home plays its second post-credits hand, and you walk out re-thinking everything you just saw.