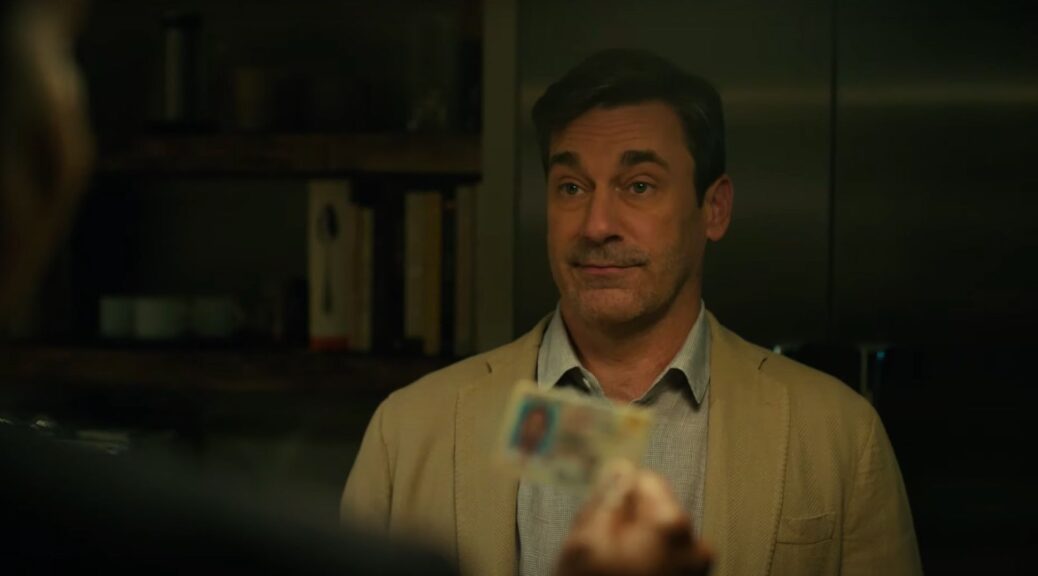 Casting Jon Hamm as the new Fletch seems like a bullseye. He has leading man charm, sharp comic timing and plenty of skill handling a one-liner.

Really, the only minus is that he might be too handsome. He doesn’t really seem like a hat guy, so that Lakers cap on his head in Confess, Fletch feels like a forced homage to the Chevy Chase original. But Hamm is wise enough to avoid imitating Chase outright, teaming with director/co-writer Greg Mottola for an Irwin M. Fletcher that’s closer to the star of Gregory McDonald’s source novels.

We catch up with Fletch as he’s left the newspaper game behind, disenchanted with the effects of the digital age. But his rep as an L.A. investigative reporter “of some repute” lands him freelance sleuthing gigs, like searching for a stolen Picasso that his Italian girlfriend Angela (Lorenza Izzo) needs as ransom for her kidnapped father.

But then a dead girl turns up in Fletch’s rented Boston townhouse and the local detectives (Roy Wood, Jr. and Ayden Mayeri) just want him to confess already. And they’d also like him to stop taking his shoes and socks off.

Of course, Fletch remains sarcastically cool throughout their surveillance, investigating on his own and uncovering a few other suspects: his stoner neighbor (Annie Mumolo), a germaphobe art dealer (Kyle MacLachlan), Angela’s mother aka “The Countess” (Oscar winner Marcia Gay Harden, hamming it up) and even Angela herself.

Mottola’s (Adventureland, Superbad) story building doesn’t stray far from the structure of Michael Richie’s 1985 original, which may not be ambitious but is at least understandable, considering the same novelist assembled both mysteries. The major difference is the lack of inspired silliness, which brings us back to the casting of Hamm.

The fake names Fletch gives out aren’t so outlandish, and you won’t find any SNL-ready skits about playing for the Lakers or going undercover at Dr. Jellyfinger’s office.

But all that was catered to what Chevy Chase did best, which was playing Chevy Chase. Hamm is actually acting. The irony here is that while the character of Fletch is now more fully formed, the movie itself just isn’t as consistently funny.

There are plenty of smiles, though. The cast of unusual suspects can be a hoot (especially Mumolo) and running gags about Fletch’s fluency in Italian, his bare feet and his attempts at charming the detectives bring some chuckles. A Mad Men reunion with John Slattery as Fletch’s salty old newspaper editor is a nice touch, as well.

Years from now, you won’t be quoting any lines from Confess, Fletch. But the hour and a half you spend with this breezy whodunit isn’t a waste, and might leave you feeling like you just met the real I.M. Fletcher.