I’m not saying Jason Statham is unconvincing with a gun. Nor am I saying that Guy Ritchie is ill-suited to direct a humorless vengeance drama.

I’m just saying that these are not their strong suits.

Wrath of Man shadows a very dour Statham—just call him H, like the bomb—as he begins training for his new gig with a cash truck crew.

Something’s up, obviously, and the only fun to be had in the film is trying to figure out what it is, so do not watch the trailer.

At The Depot, where all the trucks come and go and all the crew mock and belittle one another, we meet the assortment of characters you will not come to know or care about: Boy Sweat Dave (Josh Hartnett – where have you been?), Dana (Niamh Algar), Bullet (Holt McCallany). All of them choking on ludicrously overwritten banter, none of them drawing even a single compelling character.

Which is fine because there are at least 16 more people you won’t get to know, won’t care if they’re killed, won’t be invested in their conflicts.

Ritchie is usually much better than this at scattershot introductions of oddball lowlife clusters, each pod with its own story, each story intersection every other story at one turn or another. Maybe he’s just too out of his element setting the action in LA rather than his beloved London, but the lived-in feel of a reprobate world that’s usually a high point to a Ritchie flick is sorely missing here.

And what is the deal with these accents? By now, we know better than to expect Statham to attempt a yank accent, but what exactly is Eddie Marsan’s nationality supposed to be? Or Andy Garcia’s, for that matter?

Hell if I know. I do know that casting Statham generally guarantees some nifty fisticuffs.

He shoots a bunch of people, sure, but there’s no panache to anything. It’s a heist movie without the meticulous execution, a vengeance thriller with no emotional connection to the villain, a Statham movie with no ass kicking, and a Ritchie movie with no humor, no flash, no style. 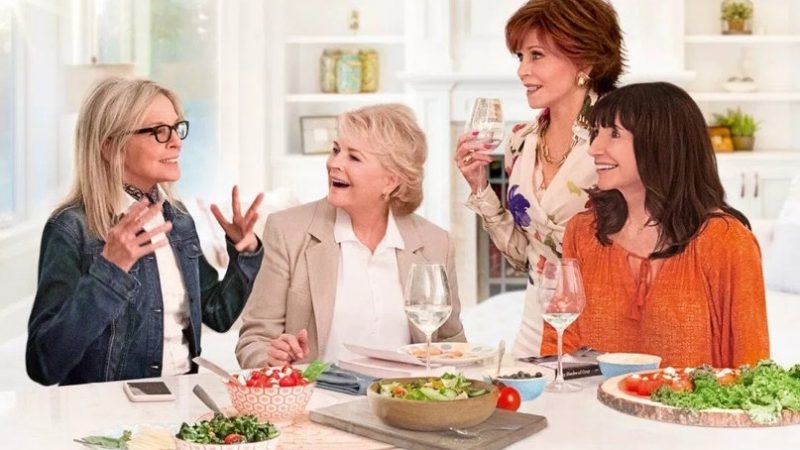 Book Club offers up a boatload of veteran Oscar winners and nominees, but limps to its final chapter as a ninety minute catch-22. So many roles for senior stars: good! What this movie makes of those roles: not so much.

Diane Keaton, Jane Fonda, Candice Bergen and Mary Steenburgen are Diane, Vivian, Sharon, and Carol, lifelong friends who began a monthly book club back in the 70s with the scandalous Fear of Flying.

With all four friends now comfortable in their golden years, the randy Vivian chooses Fifty Shades of Grey as the group’s next assignment. The girls are a bit hesitant at first but right on cue, Christian and Anna’s naughty romps reignite some fires down below.

Laughing at older people being sexual is beyond lazy, it’s ignorant. Thankfully director/co-writer Bill Holderman, in his debut feature, does seem actually interested in laughing more with his stars than at them.

But too many of those laughs are leftovers from every episode of Three’s Company, when Mr. Roper overhears Jack and Chrissy in the bedroom saying something like “It’s not big enough!” while we know they were just trying to hang a curtain rod the whole time! Ribaldry!

If you were checking off boxes, all the rich, white characters and romantic fantasies would seem like Nancy Meyers material. But Book Club can’t dig any more than surface deep, and even with all this talent, it never shows the confidence in character that elevates Meyers’s best (It’s Complicated, Something’s Gotta Give).

And then, a surprisingly subtle metaphor built around the comeback of vinyl albums gives you reason to believe Holderman’s heart is in the right place here, he’s just in over his head.