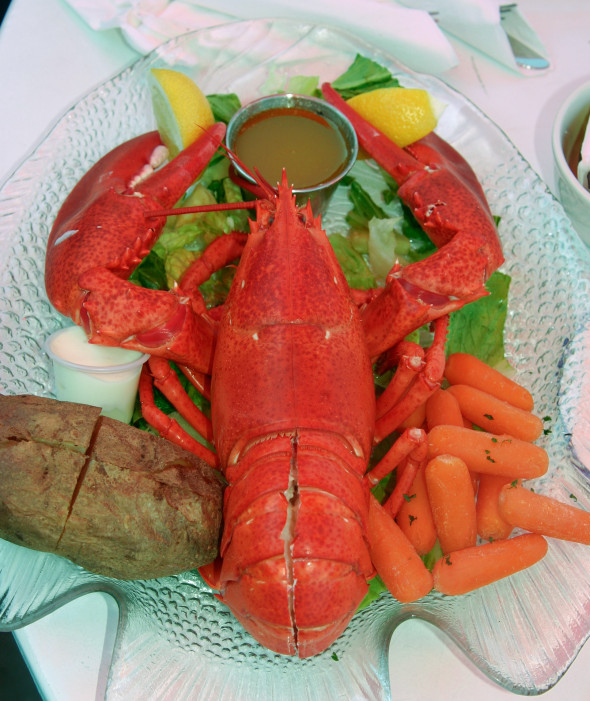 I’ve been friends with a few vegetarians over the years who have made passionate, rational pleas for me to halt or at least cut back on my ravenous devouring of the animal kingdom.

I’ve read books and watched documentaries that explain in detail the often cruel practices that go into raising and processing my protein. And yet, to quote Pulp Fiction, “Bacon tastes good. Pork chops taste good.”

And I can’t help it, I loves me a good steak.

In the 30+ years that I’ve been a carnivore, I’ve never been directly responsible for what I’ve eaten. Delicious meats seem to appear magically.

At the grocery store, animal parts are wrapped up in pristine white paper or in glossy plastic like little delicious presents.

Despite my intellectual knowledge about where my food comes from, I still find myself fundamentally ignorant because I lack a concrete experience of when the animal becomes the meal.

So, I set myself a goal: to kill and then prepare my own dinner.

My initial plan is to bag a fish. But after a day out on the creek, I left with nothing more than a wicked sunburn. Sure, I saw some fish, but only around the marina docks…where you aren’t actually allowed to fish.

Don’t tell me that fish aren’t possessed with some sort of intelligence. These guys know how to hide.

Now, my options are limited. The bunnies in my backyard are too clever and adorable to seriously consider. So I decide to become the Grim Reaper to one of the only live animals sold regularly at the grocery store…a lobster.

The decision is both convenient and light on the guilt meter. Lobsters are tough and pointy and I figure their claws give them a fighting chance.

So I drive myself to the Clintonville Giant Eagle and nervously wheel my cart over to the fish counter.

The helpful fish guy is pretty chatty. “This one,” he said, “I named it Lefty because he was missing his right claw.”

Great, I thought. They have names.

I select two 1 ½ pounders that the guy wrangles out of the tank. To schlep them home I receive a lobster box—the same sort of box my childhood gerbils came in, except without air holes and with a recipe printed on the side.

At home I open the box, experimentally stare into the eyes of the lobster on the top, and poke it gently on the back. Its eyes retreat into its head. I shriek and shut the box.

I’ve read online that you can put lobsters in the freezer to lull them into a dormant state before killing them. Supposedly this helps dull their pain. So, I pop the box in the freezer, pour myself a glass of Sauvignon Blanc and hop on my laptop to research how to kill these beasties humanely.

I watch a few videos demonstrating the technique of splitting their heads in half before boiling. (This severs their nervous system and is apparently a much quicker path out of life than the hot tub version.)

I steel myself for the kill.

I extract the lobster box from the freezer and open it on the counter. The lobsters have shifted position. Now they seem to be hugging each other with their rubber-banded claws. The scene is full of pathos.

Placing a cutting board and a chef’s knife on the counter, I check that the water is boiling in my big stock pot. I remove lobster #1 and place it on the cutting board.

Tapping the tip of the knife at the center of its head, the lobster’s eyes again retreat, but this time less far. I hope that this indicates less sensitivity. I drag in a deep breath. This is the moment when I discover if I have what it takes.

I look into the beady little eyes of the crustacean and thank it for its service. Then, I angle the knife up and plunge it down.

My aim is bad.

Either I winced or the knife was too dull. But instead of a nice, neat slice right between the eyes, the cut is too far too the left. A third of the thing’s head is now flopping to the side, still kind of connected to the body.

There is diluted bloody water streaming off the cutting board and onto the countertop.

“Is anything wrong?” my husband calls from the living room.

I jump up and down quietly in socked feet, flapping my arms around, the knife flinging droplets of lobster blood across the kitchen. I swallow a squeal.

“Everything is fine,” I choke out.

The lobster is starting to wiggle on the counter. Clearly it’s starting to thaw out and is probably at the very least inconvenienced by the massive head wound. My hand clenches on the knife and I approach the counter, taking careful mincing steps to avoid the lobster blood now pooling on the linoleum of the floor.

I reposition the knife. The lobster squirms in a seeming attempt to flee.

“There is no escape,” I mutter as I swing the knife down.

My next cut is cleaner and I sever its head lengthwise and throw all the lobster bits in the boiling water.

“Are you talking to me?” my husband hollers.

I ignore him, trying to think my way through my next kill.

All the experts say that the clean slice through the head is the best way to go. But probably not if you botch it. I look back over my shoulder at the pot. Any more delay and I’m going to have to deal with two separate cooking times. I’m already feeling stress about having to clean up so much lobster blood.

So, I pick up lobster #2 and dump it, still wriggling, into the pot on top of the body of its mangled companion. Its legs wiggle. Its tail flexes and curls around the edge of the pot. Is it attempting to climb out? I wonder. I stab at the tail with my knife and poke it down into the pot.

Slamming the pot lid on and slumping against a section of unbefouled countertop, I realize my heart is thumping against my ribs and my hands are trembling with an excess of adrenaline.

Twelve minutes later dinner is served, bright red and steaming. As we crack open the lobsters with kitchen shears and a garlic press (not owning the correct tools) my husband turns to me and tells me I did a very good job with dinner. Then he screams when he discovers a greenish bit inside his lobster.

I have no idea.

This dinner is tasty and somehow more real than any other dinner I’ve ever had.

← Sexy Meddling Kids
Girl in the Plastic Bubble →
Scroll Up