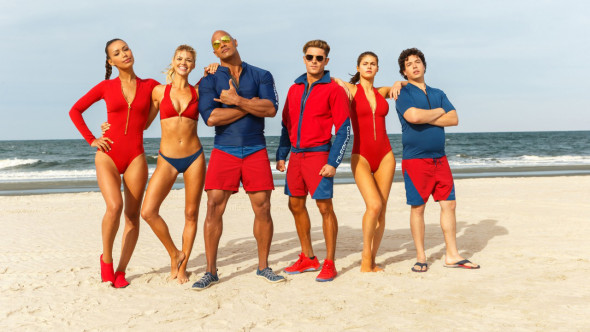 Did you hear about the lifeguards that fight crime?

“Wow, that sounds like a really entertaining but far-fetched TV show!”

So says Brody (Zac Efron), one of the new recruits on the super lifeguard team at Emerald Bay, and this very self-aware attitude is the main reason the big screen Baywatch works as well as it does.

Yes, the entire premise has always been a ridiculous excuse to ogle beautiful bodies, so director Seth Gordon (Horrible Bosses) wisely chooses to have some fun with that and not be stingy with the slo-mo!

Dwayne Johnson is Mitch, head of the Baywatch team and all-around King of the Beach. He’s got Stephanie (Ilfenesh Hadera) and C.J. (Kelly Rohrbach) as his veterans on the squad, while Summer (Alexandra Daddario) and Ronnie (Jon Bass) are rookies who just won their spots during open tryouts.

Then there’s Matt Brody (pinching his character name from two of the lead roles in Jaws is another clue this film’s tongue is in the right cheek), an Olympic swimmer nicknamed the “Vomit Comet” for the way his career flamed out thanks to gold medal partying.

Brody arrives thinking he’s God’s gift to Baywatch, quickly learns some humility, and joins the team just as they’ve stumbled onto another case. Could local business tycoon Victoria Leeds (Priyanka Chopra from TV’s Quantico) really be the biggest drug dealer on the beach?

And she might get away with it, too, if not for these lifeguards and their sexy meddling!

Writers Damian Shannon and Mark Swift come from the land of bad horror (Freddy vs. Jason, Friday the 13th reboot) but they’re able to tap into a witty and breezy R-rated vibe that tests some crude waters without ever diving in.

As often as the ladies flaunt buns and cleavage, Johnson and Efron’s suns out/guns out show gets even more attention, which seems only fair as their roles also have the most substance. It helps that the actors share an easy, likable chemistry and neither is above poking fun at their own image. Self-deprecation is usually endearing, and running gags involving Brody’s nicknames and a “mini-Mitch” aquarium decoration are consistent winners.

Hey, it’s summer, the perfect time for a trashy little novel to read by the pool. Baywatch fits that same bill, and ends up all the more fun for not trying to be anything else.

Subscribe in a reader
← Yo, Chucky!
Murder on the Menu →
Scroll Up