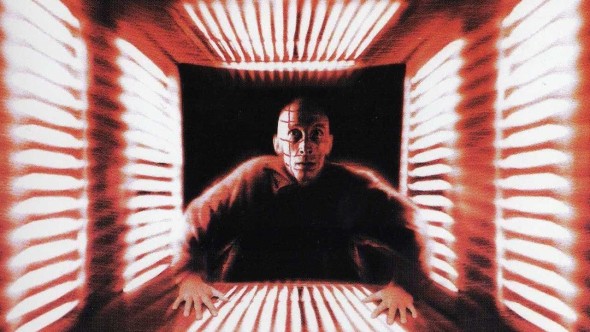 There are thousands of horror films that can be called Canadian horror, in that so many movies are filmed in Canada. But we weren’t looking for Hollywood on the cheap. No, we wanted to celebrate the subversive yet polite genre filmmaking flowing from the Canucks themselves. We were looking for films made by Canadians in Canada.

We didn’t want to zero in on just one guy, either. There are so many films by David Cronenberg that could have made the list (indeed – maybe he deserves an entire podcast?!), but we limited ourselves to one so that we could celebrate some of the horror variety you can find bundled up in America’s Hat.

Pasty malcontent Travis (Adam Boys) writes the underground comic series Vulgarian Invasions. One inflammatory comic book too many lands him on the hit list of local thug Leonard Fong, who saws off his disrespectful drawing hand. But even if Travis is ready to surrender, that dismembered appendage is not.

The effort and tone are reminiscent of the bargain basement horror comedies of Frank Henenlotter (think Frankenhooker) – good-natured but wildly tasteless. Unlike Henenlotter or the Troma films O so clearly admires, Bloody Knuckles has a point to make. Art should be dangerous. Safety is the refuge of the cowardly.

Most faults can be forgiven this film, especially if you pine for the silly fun of low-budget horror of a bygone time. Or if you just really like free speech.

Twin sisters, Canadians, and badasses Jen and Sylvia Soska have written and directed a smart, twisted tale of cosmetic surgery – both elective and involuntary.

Katharine Isabelle (Ginger Snaps) stars as med student Mary Mason, a bright and eerily dedicated future surgeon who’s having some trouble paying the bills. She falls in with an unusual crowd, develops some skills, and becomes a person you don’t want to piss off.

The Soskas’ screenplay is as savvy as they come, clean and unpretentious but informed by gender politics and changing paradigms. They also prove skilled at drawing strong performances across the board. Isabelle is masterful, performing without judgment and creating a multi-dimensional central figure. Antonio Cupo also impresses as the unexpectedly layered yet certainly creepy strip club owner.

Were it not for all those amputations and mutilations, this wouldn’t be a horror film at all. It’s a bit like a noir turned inside out, where we share the point of view of the raven haired dame who’s nothin’ but trouble. It’s a unique and refreshing approach that pays off.

Yes, there are many, many Cronenberg films that could have taken this or any other spot on the countdown. Videodrome was the last true horror and truly Canadian film in his arsenal, and it shows an evolution in his preoccupations with body horror, media, and technology as well as his progress as a filmmaker.

Deborah Harry co-stars, and Woods shoulders his abundance screen time quite well. What? James Woods plays a sleaze ball? Get out! Still, he does a great job with it. But the real star is Cronenberg, who explores his own personal obsessions, dragging us willingly down the rabbit hole with him. Long live the new flesh!

Listen to the whole conversation on the FRIGHT CLUB PODCAST.