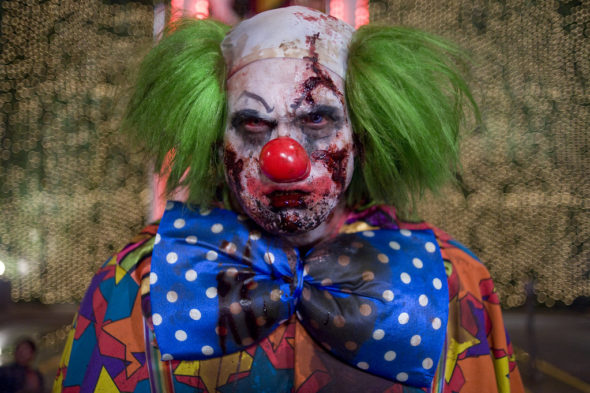 A perversion of childhood innocence in an attempt to create anxiety and fear—that, basically, is the definition of carnivals, circuses, theme parks. Maybe that’s why the amusement park and its inhabitants make for such excellent horror movie fodder. Let’s discuss.

Writers Rhett Reese and Paul Wernick (Deadpool) take the tried-and-true zombiepocalypse premise and sprint with it in totally new and awesome directions. An insane cast helps: Woody Harrelson, Jesse Eisenberg, Emma Stone, Abigail Breslin, Bill Murray. That’s eight Oscar nominations and one win, that’s what that is. Plus, I cannot imagine a better cameo in a film than Murray’s in this one.

Between the sisters trapped on a ride slowly lowering them toward hungry mouths (good thinking on those boots, ladies!), Columbus’s rule breaking heroism with that effing clown, and the all-time great Tallahassee shoot out, director Ruben Fleischer directs the hell out of the amusement park portion of this movie.

The basic premise of It is this: Little kids are afraid of everything, and that’s just good thinking.

Bill Skarsgård has the unenviable task of following a letter-perfect Tim Curry in the role of Pennywise. Those are some big clown shoes to fill, but Skarsgård is up to the challenge. His Pennywise is more theatrical, more of an exploitation of all that’s inherently macabre and grotesque about clowns.

From a Santa Cruz carnival to a hall of mirrors to a wall of rabbits in cages, writer/director Jordan Peele draws on moods and images from horror’s collective unconscious and blends them into something hypnotic and almost primal.

But Us is far more than a riff on some old favorites. It’s as if Alice’s Adventures in Wonderland turned into a plague on humanity.

And it all starts innocently enough with a family outing to the carnival—an environment that has always been a perversion of innocence, a macabre funhouse mirror of the playthings and past times of children. Peele takes advantage, using this stage to create an even wilder and more bewildering look at who we are.

Short and sweet, like most of its performers, Tod Browning’s controversial film Freaks is one of those movies you will never forget. Populated almost entirely by unusual actors – midgets, amputees, the physically deformed, and an honest to god set of conjoined twins (Daisy and Violet Hilton) – Freaks makes you wonder whether you should be watching it at all.

This, of course, is an underlying tension in most horror films, but with Freaks, it’s right up front. Is what Browning does with the film empathetic or exploitative, or both? And, of course, am I a bad person for watching this film?

Well, that’s not for us to say. We suspect you may be a bad person, perhaps even a serial killer. Or maybe that’s us. What we can tell you for sure is that the film is unsettling, and the final, rainy act of vengeance is truly creepy to watch.

← I Don’t Want to Go Out—Week of September 16
Screening Room: Hustlers, Brittany Runs a Marathon, Tigers Are Not Afraid, Haunt, Depraved →
Scroll Up