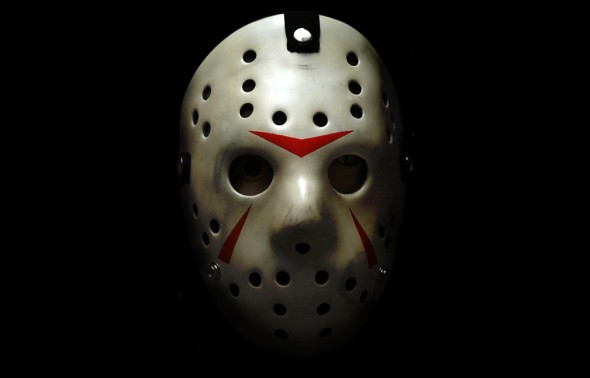 Our weekend countdown comes a day early this week so we can celebrate Friday the 13th – today’s date, and that little slashser franchise that could.

Friday the 13th (1980): Our tale began in 1980, when a mother – grief-stricken over the drowning death of her disfigured son Jason – kills a campful of kids. Then Jason kills to avenge his mother for a few flicks. Then an unrelated ambulance driver kills kids, then back to Jason, who goes to camp, to Manhattan, to hell, to outer space, and finally to Elm Street before returning in ‘09 to Crystal Lake to rekindle his hatred for backpackers.

It should surprise no one that the only one that’s really worth a look is the original. This is not a good film, or even an especially scary film, but the characters are not entirely clichéd and the plot twist is somewhat clever. Over-the-top Tom Savini FX give you something to look at beyond the revolving door of shrieking, dying knuckleheads, and the movie boasts an almost absurd number of odes to the film Psycho. Also, of course, is the outstanding Kevin Bacon death scene. (Kevin Bacon Death Scene – I love them! I think I saw them open for Skinny Puppy in ’88.)

Friday the 13th Part II (1981): Gone is the novelty of the grief-crazed mother, replaced by the far more potent (franchise-wise) image of an unstoppable killer in Jason Voorhees. He’s played unimpressively by both Warrington Gilette and Steve Dash. With a bruised thumbnail and a bag over his head, the now fully grown Jason finishes off the last survivor of the original, shows a loving affection for his mother’s disembodied head, and kills nearly everyone at the camp next door to Crystal Lake- even wheelchair-bound Ted (a sly ode to Tobe Hooper, or am I overly optimistic?). But not Ginny, played by genre favorite Amy Steel. Ginny believes psychology can explain things, and shows her sympathy for poor Jason by using the term “frightened retard.” Real professional, Ginny. Her green turtleneck and rustic button down wearing beau Paul looks on. Paul – don’t be a hero! Ginny’s not worth it! (PS: Nonsensical ending = huge cop out.)

Friday the 13th Part III (1982): The next day, Jason wanders to a sketchy grocery store, kills its unpleasant owners, eats their rabbit and pilfers some clothes. Then he goes further around the lake to Chris Higgins’s family’s summer place, Higgins’ Haven. Episode 3 is mostly famous for introducing the iconic hockey mask, and if you were lucky enough to see it in theaters, you tasted the satisfaction of uninspired 3D, coming at you via a pole, snake, eyeball, yoyo, popcorn, pitchfork, and any number of gimmicks that translate poorly to home enjoyment. Jason smooshes a guy’s head so his eye pops out. Another guy keeps faking his own death, while yet another walks on his hands for no reason I can fathom. The film ends with an unsatisfying dream sequence followed by the sighting of Jason’s dead body. So, clearly, he’s gone for good. Whew!

Friday the 13th(4): The Final Chapter (1984): Would that it were. A little further around the lake from Higgins’ Haven are other private cabin homes that humans continue to rent, regardless of the slaughter taking place over the last few days (episodes 2 and 3). But Jason’s dead now, so no worries, eh? This second attempt to end the franchise inadvertently begins what I like to call the Tommy Trilogy. Tommy Jarvis (Corey Feldman) and his mom and sister live next door to a cabin rented by six horny, disposable teens who’ll skinny dip, pair up, dance poorly and get picked off by the not-really-dead-at-all Jason. Part 4 also sees Crispin Glover (professional oddball and Back to the Future’s George McFly) get laid (after which, of course, comes death by corkscrew). Later, Feldman, the film’s other Eighties icon, chops Jason Voorhees to pieces. Tommy just chops and chops and chops. Chop him up good, Tommy! Not that it will help.

Friday the 13th Part V: A New Beginning (1985): A profitable franchise, like an unstoppable murdering machine, is hard to kill. Since the chopping scene in that last installment left little possibility for Jason’s survival – but so much more money to be made – the unavoidable 5th installment had to come up with something novel. So, we open on a dream sequence that has Jason’s killer Tommy witness Jason’s graveyard resurrection. But that’s too nutty – surely that didn’t happen! Could it be? Or is it adolescent, clearly disturbed Tommy? Or is it some other totally random guy with no connection to Jason whatsoever? Yawn. Well, whatever Part 5 lacks in cinematic quality it compensates for with profanity and bralessness. Yep, lotta boobs in this one.

Friday the 13th Part VI: Jason Lives (1986): This is the final installment of the Tommy Trilogy. The first one sees youngster Tommy Jarvis chop Jason to bits. Then an adolescent Tommy heads out to a halfway house far from Crystal Lake, but first he dreams of someone digging Jason up and bringing him back to life. So, naturally in his final go-round, a young adult Tommy goes to the cemetery, digs up Jason (with Ron Palillo – Welcome Back, Kotter’s Horshack –  in tow), and brings him back to life. Genius. Keep in mind, Jason was honest to God dead this time, and a bolt of lightning through a metal fence post reanimated him (zombie Jason!) It marks a change, however subtle – Jason’s not just hard to kill now; he’s the walking dead.

Friday the 13th Part VII: The New Blood (1988): By the late Eighties it was impossible to keep each one straight, and yet the most famous Jason doesn’t enter the picture until this 7th installment: fan favorite Kane Hodder. Hodder’s Jason is chained to a boulder deep in Crystal Lake, but he’s released from his lake prison by a confused telekinetic. He kills the kids vacationing next door, other campers on and around the lake, and eventually has a face-off with the telekinetic. Terry Kiser (Bernie from Weekend At .. fame) plays a total dick of a doctor. A lot of weirdness happens in this one, and yet it still feels like a paint by numbers pick-off of horny, one-dimensional teens.

Friday the 13th Part VIII: Jason Takes Manhattan (1989): We were all so tired of Jason by 1989. So tired. So writer/director Rob Hedden decided to freshen things up by leaving Crystal Lake behind and spending an interminable amount of time on a big boat, a row boat, on docks and in sewers in an attempt to make a comment on the ugly modern times in urban America. The tiniest graduating class of all time boards a boat for Manhattan, but their classmates, Mall Hair and Mullet, inadvertently dredged Jason up from beneath the water with their anchor the night before, so he stows away. A lot of Eighties clichés later, the prickiest school administrator in history and the rest of the survivors have life boated to NYC, only to fall prey to gang members and druggies and assorted urban whathaveyou. Eventually Jason melts into a frightened little boy. What the hell?

Jason Goes to Hell (9): The Final Friday (1993): Speaking of hell. So Jason’s a demon, apparently, and he’s killed in an FBI sting. That’s right, a whole SWAT team manages to hide themselves and their giant flood lights in the forest around Camp Crystal Lake without drawing Jason’s notice. One minute he’s alive and full size (regardless of what happened to him in those Manhattan sewers), the next, he’s blown to bits. Unfortunately his black heart keeps beating, and he (by way of a kind of giant demon snake) slides from one poorly drawn character into another. This means there’s really no Jason for most of the film, just Jason’s essence, so to speak. But the killers look like regular schlubs because Jason’s inside them. That’s not scary, although one of his bodies looks a lot like that Mayhem guy from the car insurance ads, which seems fitting. It all leads to some nonsense about his bloodline and a mystical dagger. And it ends with Freddy Krueger laughing.

Jason X (2002): He’s been to hell. Where to now? How about deep space? Well, there is a difference between quality bad and worthless crap, and this movie plain old sucks. The great David Cronenberg plays the mad scientist who cryogenically freezes Jason Voorhees. Flash forward 453 years, and the frozen carcass is found, brought aboard New Earth’s space craft, and Jason Meets Aliens unspools. The nubile youngsters are trapped on board with the freshly thawed killing machine.

Freddy vs Jason (2003): At long last! Here’s the skinny: Freddy Krueger can’t hurt anyone if he’s forgotten, so he (somehow – think back ten years to when Jason went to hell) brings Jason back from the dead and sends him to Elm St. to carve up some youngsters. Freddy believes that the carnage will revive the town’s memory of the old nightmare killer. The memories make Freddy strong enough to kill again, but now Jason won’t get off his turf, so they have to duke it out. Some highly augmented and imaginative teens piece this puzzle together and hope to find a way to finish both monsters off for good. Will they succeed? And who will win this battle between the iconic bloodletters? With a little fresh blood spilling from these tired old veins, don’t we all win, really?

Friday the 13th (2009): Unfortunately, Freddy V Jason wasn’t the capper. Not a remake at all, 2009’s Friday the 13th is just another sequel. For the most part, you get what you should, by now, expect: drinkers, sluts, jocks and drug users die; quirky, eternally single ethnic friends brought along for comic relief die; disposable youth mostly fall victim to hatchets to the back, machetes to the skull. There’s also a return to the old “boobs a’bouncing” school of slashers. (This bouncing usually takes place just prior to a hatchet to the back or a machete to the skull.) In fact, there seem to be no tired formulas the film is wary to trot out. It’s as if Jason pulled out the Way Back Machine to revisit the land of 80s horror film cliches. Too bad he didn’t stay there.