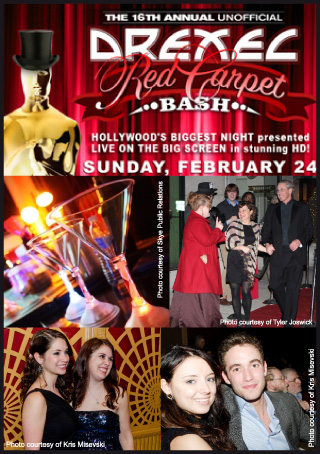 MaddWolf will celebrate Hollywood’s biggest night by annoying people with our jocularity at the 16th Annual Drexel Red Carpet Bash. (Seriously, last year a woman pooped on the party by shushing us, saying, “I don’t appreciate your banter.”) So come on out to the Drexel (2254 E. Main St.), witness the mayhem, and feast your eyes on Bradley Cooper by way of the theater’s brand spanking new digital projection system.

Oscar Night Co-Host George Wolf will bring his “A” banter while Hope hands out a fantastic assortment of prizes. How can you partake? Just bedeck yourself in a Hollwood-themed costume for a chance to win. For those less bedeckable, you might also answer some trivia, or beat us all with your Oscar picks (which could win you a full year of free movie tickets!).

Take in the glitter and glam on the big screen, take home some fun prizes, and enjoy a cash bar and tasty, free hors d’oeuvres from local restaurants. What’s not to love?

So join MaddWolf, won’t you? This Sunday night, help us ring in Oscar with the Drexel folks and their sparkling new digital theaters. Tickets are $30 in advance / $35 at the door. (DREXEL MEMBERS are $20 in advance / $25 at the door.) The event begins at 6:30 and runs until the last statuette is given to Ben Affleck for the best picture he (apparently only adequately) directed.

← Drugs are Bad…Mmmkay?
For Your Queue: Affleck Proves his Mettle as Director →
Scroll Up