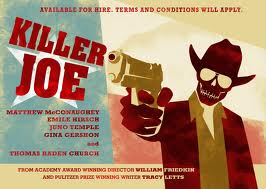 As the new year rolls in, no thanks to the Mayans, we wanted to remember all the great movies that went underseen in 2012 in the hopes that they might find a little love in their next life on DVD. Each of us picked a couple titles we think you might have missed. Do yourself a favor and seek them out now.

George’s pick: The Imposter. It’s hard to pick one, but The Imposter is a masterfully assembled documentary, with a story that takes so many unbelievable turns you will have to scrape your jaw off the floor.

Hope’s pick: Killer Joe. Wow, this was one wild, wrong-headed mess of a brilliant piece of filmmaking. Astonishing performances showcase a cast ready to do whatever is asked of them, and that is a lot. I will pass on that chicken dinner, thanks.