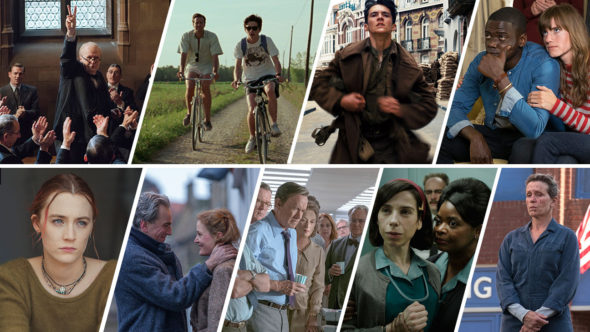 Rarely is the Oscar ticket quite so easy to fill out. This year’s set of nominees offers more clear-cut front runners across the board than most previous broadcasts, but the other aspect of note is that the actual quality of the work is tighter than in years past. In nearly every category, the likely winner is fairly simple to predict, but category after category we find ourselves saying that we’d be pretty pleased no matter the outcome.

The talent and work being recognized this year is that impressive.

Best Female in a Leading Role

Should win: McDormand. Sally Hawkins, always wonderful, was amazing in The Shape of Water. We’re so happy Margot Robbie got the notice she deserves for I, Tonya. Saoirse Ronan will certainly win an Oscar or two at some point in her phenomenal career. Meryl Street—is Meryl Streep. But there is no denying McDormand’s fiery, fearless Mildred Hayes. The performance is a career high for one of the most talented and formidable performers working today.

Best Male in a Leading Role

Should win: Timothee Chalamet. Or Oldman. Either way, we’re good. We’d take Daniel Kaluuya, to be honest. And you can never go wrong with Denzel Washington or Daniel Day-Lewis. No, this is an impressive set of performances right here, and while Oldman is a near shoe-in (for good reason, after a long and impressive career, for an impeccable performance), Chalamet’s turn announces a breathtaking talent and he may have outperformed them all.

Will win: Allison Janney I, Tonya

Should win: Laurie Metcalf, although we will not weep when Janney takes the Oscar. Janney is a veteran character actor, one who leaves a mark on every single film, whether drama or comedy. She should have won at least one Oscar by now. But if, by chance (and it’s a long shot at best), Metcalf takes this one home for her fearless and faultless work as a piece-of-work mother in Greta Gerwig’s astonishing Lady Bird, well, we’ll be cool with that.

Should win (HM): Willem Dafoe. Too close to call for us, really, between Rockwell and Dafoe, two astonishing and under-appreciated American actors who should have several Oscars between them at this point. Rockwell’s racist volcano of a redeemable small-town cop gave the actor hundreds of opportunities to shine, but Dafoe’s understated, caring motel manager offers an emotional center of gravity for Sean Baker’s The Florida Project and we’d love to see him recognized.

Should win: Pick ’em. Honestly, whether this award goes go McDonagh and his sharp observation on anger and compassion, or whether it goes to Greta Gerwig’s pitch-perfect coming of age tale Lady Bird, or Jordan Peele’s epic piece of social commentary Get Out, or Emily B. Gordon and Kumail Nanjiani’s revelatory romantic comedy The Big Sick, or Guillermo del Toro and Vanessa Taylor’s monster love story The Shape of Water, there can be no complaint.

Will win: James Ivory, Call Me by Your Name

Should win: James Ivory, Call Me by Your Name. Although we would cheer if the under-appreciated Mudbound picked this one up, there’s no denying the powerful storytelling in Ivory’s script and the way it drove Luca Guadagnino’s sumptuous direction.

Should win: Of the nominees, Faces Places, but this year’s biggest snubs are in the documentary category. No love for either Whose Streets? or Jane? Wow.

Will win: The Square

Should win: The Square, by an eyelash over A Fantastic Woman.

Should win: Coco. It’s a pretty weak year in animated features, to be honest, so—like so many categories this year—the likely winner is pretty clear. Both Loving Vincent and Breadwinner are strong contenders, though no one saw either. Both Ferdinand and The Boss Baby are unworthy of the nomination. Coco is not Pixar’s strongest, and that can sometimes weigh too heavily on a film. You can’t put out a Toy Story or Up! every time, and Coco offers a touching, vibrant, skeleton-filled cultural extravaganza that is joyous to behold.

Should win (HM): Any of them. This is the most gorgeous set of nominees we have possibly ever seen. We will celebrate no matter who wins because we adore every single one of these names: del Toro, Greta Gerwig, Jordan Peele, Paul Thomas Anderson and Christopher Nolan. In a wild variety of efforts—from taut, ensemble-driven war to period character studies to horror—the style, tone and detail in every one of these films showcases a master at the helm. Yes, it is a weird turn that Martin McDonagh didn’t get a nomination, but we wouldn’t drop anyone from this group.

Should win: So many great ones here, but we’ll say Dunkirk. (Or Get Out, or Lady Bird, or…)

The Academy Awards — again hosted by Jimmy Kimmel — will air live on ABC on this Sunday, March 4.