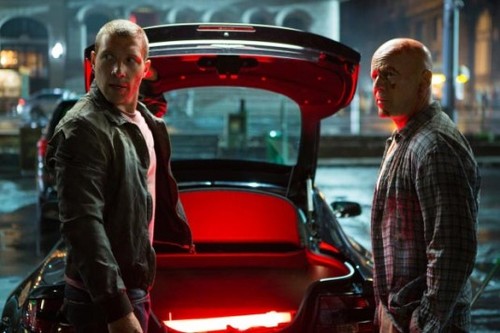 Okay, full disclosure:  the original Die Hard is my all time favorite movie.

One of that film’s many great qualities is, back then Bruce Willis’s John McClane character was a regular guy in extreme circumstances. While each of the three sequels has been at the very least decent, McClane himself has morphed into more of a wise-cracking superhero.

That has never been more true than in A Good Day to Die Hard, the fifth, and definitely the weakest, in the series.

This new adventure has John traveling to Russia, where there apparently is no police force. He’s there to help his estranged son Jack (Jai Courtney) out of a jam, but John is barely out of the cab from the airport when things start exploding, drawing father and son into a ridiculous yarn involving a Russian political prisoner and a secret file.

There may have been an acceptable action flick at the heart of Skip Woods’s script, but director Jon Moore (Max Payne) buries it under misguided pacing and wretched excess.

The extended car chase that kicks off the film becomes downright tedious, setting the stage for a film that never has a chance to build any tension or interest. Though the film’s finale does boast some action that’s worthy of the Die Hard name, getting there just isn’t enough fun. Moore keeps his foot on the gas until he abruptly stops for some father-son bonding time, and much of the film feels slapped together (the bad editing job doesn’t help matters).

Producers may be grooming Courtney (Jack Reacher) to take over the franchise, but his charisma, in this effort at least, is lacking.

Sadly, so is the film.

A Good Day to Die Hard

← For Your Queue: Affleck Proves his Mettle as Director
Hey, your sandwich is talking to you →
Scroll Up