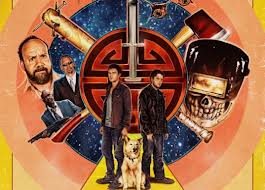 If you hear these words while holding a bratwurst to your head like a cell phone, it would seem the soy sauce has indeed chosen you, as it has Dave and John in the mind-bender John Dies at the End.

Slacker vigilantes hunting the supernatural, Dave (Chase Williamson) and John (Rob Mayes) “handle unusual problems.” Like dealing with that meat monster in the hot girl’s basement – things like that. How did they come to this occupation? Well, that’s just what Dave is going to explain to a curious journalist (Paul Giamatti).

The tale he spills comes together in shades of Cronenberg, Burroughs, and Philip K. Dick, spun with the sensibilities of Sam Raimi circa Evil Dead. And that, my friends, is fine company.