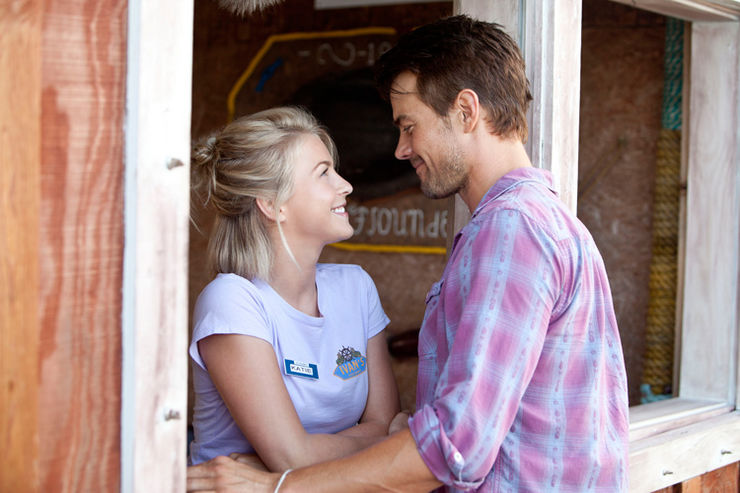 The formula in question comes courtesy Nicholas Sparks, whose novels, from Message in a Bottle to The Notebook and beyond, have all become films with very recognizable elements. Attractive, lovestruck people in an idyllic setting are kept apart by emotional damage, family tragedy and ties to the past but somehow fight through the melodrama to find each other just in time for a tear-filled finale. And rain, don’t forget getting soaked by rain.

So far, the films have ranged from heinous to barely watchable.

The latest, Safe Haven, ranks as one of the better efforts. Not good, but at least a wee bit of an improvement.

The quaint setting this time is Southport, a small town in North Carolina that seems a perfect landing spot for Katie (Julianne Hough), a young woman running from..say it with me..her past.

Is she emotionally fragile, and pretty? Why yes, and so is local nice guy Alex (Josh Duhamel), the single father who is still reeling from the death of his wife.

Even if you haven’t read the book, you’ll guess most of the rest, though director Lasse Hallstrom (Chocolat) does an admirable job of exercising some restraint as long as possible.

In the end, though, the emotional manipulation ingrained in each Sparks story will not be denied, as secrets from both Katie and Alex’s past collide in a melodramatic mess.

But wait! Sparks then adds the coup de grace, a shameless device that, though easily omitted to benefit the film version, showcases the formula so well all you can do is tip your hat in disgust.

These stories aren’t designed to be average. They are meant to be remarkable, if only for the sheer bombast of their sentimentality, and Safe Haven will keep the customers satisfied until the next installment.