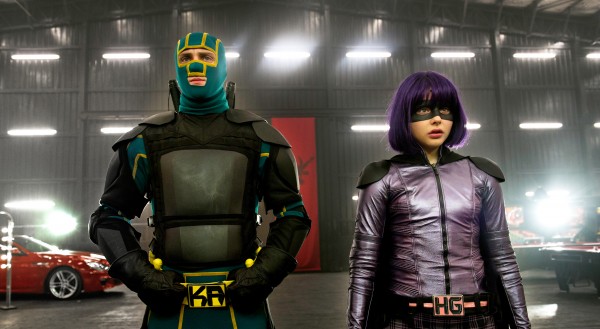 Well, consider the party that was Kick-Ass officially pooped upon.

It’s too bad, because three years ago that film emerged as a violent blast of tongue in cheek fun.  This time around, Kick-Ass 2 provides plenty of violence, but the tongue is far from the cheek, leaving fun in very short supply.

The heroic duo of “Kick-Ass” Dave (Aaron Taylor-Johnson) and “Hit-Girl” Mindy (Chloe Grace Moretz) is back,  joined in crime fighting by a group of other homemade heroes, including Colonel Stars and Stripes (an uber-macho Jim Carrey).

In response, Kick-Ass’s friend-turned-foe Chris/”Red Mist,” (Christopher Mintz-Plasse) rebrands himself as super villain “The Motherfucker.” Hungry to take revenge on Kick-Ass for killing his father,  The MFer recruits a team of super evil friends to take on the do- gooders.

Director/co-writer Jeff Wadlow (Never Back Down) just doesn’t seem to understand what made the original Kick-Ass so appealing. As violent as it was, it was never mean-spirited, but K-A2 is permeated by a nasty streak that meanders between uncomfortable and downright distasteful. Regardless of what they did or didn’t do in the source comic book, a film is a different animal, and this one is not at all playful.

Jim Carrey made headlines by refusing to promote K-A2, apparently moved by the Sandy Hook shootings to reconsider the film’s tone. You can see now he has a point, though it’s a bit curious why it wasn’t apparent from the start.

Taylor-Johnson and Moretz are effective, both still able to showcase some sweet vulnerability in their respective characters. The script saddles Moretz with the tougher assignment, as Hit-Girl struggles with the transition from sidekick to major player.

The framed picture she keeps of “Big Daddy” (Nicolas Cage) provides a sobering reminder of how much he’s missed in part two. Cage’s hilarious Adam West parody kept the original Kick-Ass grounded in smart mischief, while the new installment plays it much too straight.

The kicking of asses was never the point of Kick-Ass, a point that’s obviously lost on Kick-Ass 2.