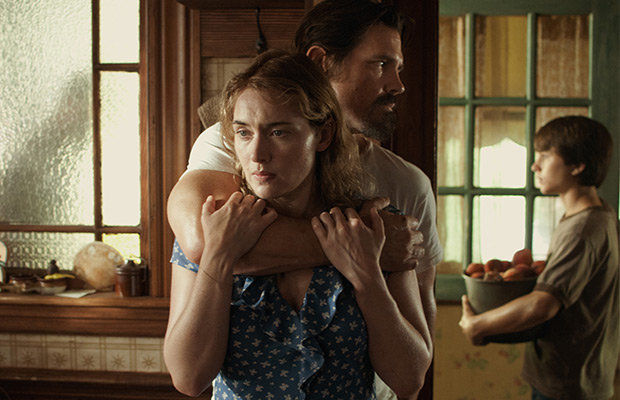 Walking out of the preview screening for Labor Day, a woman behind me remarked, “I don’t know..I need action, a hook in the back or something!”

So, while the film won’t please the “hook in back” demographic, it will also let down fans of writer/director Jason Reitman, who makes a curious left turn into overcooked melodrama.

Adapted from the source novel by Joyce Maynard, it is a story told in flashback narration by Henry (Tobey Maquire), recalling one memorable Labor Day weekend from his youth.

While shopping with his mother Adele (Kate Winslet), young Henry is approached by Frank (Josh Brolin), an escaped convict on the run.  Quietly forcing his will upon them, Frank takes refuge in their New Hampshire home, nursing the wounds from his jailbreak and slowly becoming a savior to both mother and son.

The breakdown of her marriage has left Adele constantly depressed, and left Henry without a strong male role model. How fortunate that Frank cooks, fixes most anything, knows baseball, swears he’s not the monster the papers say he is, and oh, yeah, simmers with sexuality.

As does most of the film, juxtaposing Adele’s clear ache for a man with young Henry’s exploding hormones. It’s all very earnest and obvious, miles away from the brilliant edge Reitman brought to every other feature he’s done (Thank You for Smoking, Juno, Up in the Air, Young Adult).

It makes you wonder just what inspired Reitman to film this story, one that is equal parts Douglas Sirk and Nicholas Sparks. Perhaps it was just the challenge of elevating it, to see if his talents, combined with those of strong actors, could give it resonance.

While Labor Day is indeed better for all of their efforts, the air of disappointment lingers.