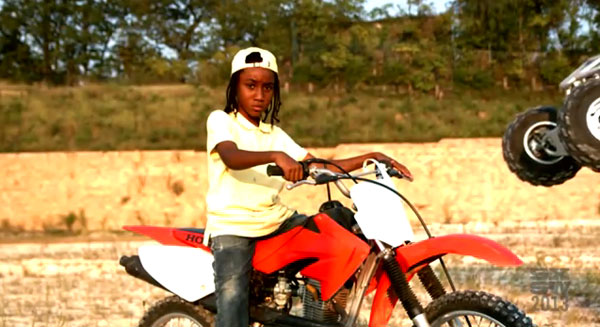 A coming of age story set in poverty stricken, crime riddled West Baltimore sounds like an episode of the Wire gone sentimental. That’s not 12 O’clock Boys, though.

We follow Pug, a savvy and funny preteen on the verge of adult decisions that will impact his life’s trajectory. And length.

What is absolutely fascinating about Lofty Nathan’s documentary, though, is that gangs and drugs and time spent on the corner are the furthest things from Pug’s consciousness. This is not to say that his goals are legal, exactly. And they certainly aren’t safe.

No, Pug wants desperately to join the dirt bikers who overrun West Baltimore streets each Sunday night, weaving in and out of traffic, through red lights, onto sidewalks – anywhere they like. Hundreds of zig-zagging, wheelie-popping maniacs have a blast while terrorizing and amazing onlookers, and Pug has no more passionate wish than to become one of them.

Filmed over three years, the doc chronicles Pug’s burgeoning adolescence as well as the societal, cultural and economic landmines between him and manhood. The fact that Pug is adorable – very small with a cherubic face and sly smile – only makes his struggle, his innocence that much more poignant.

But Nathan unveils more than just one boy’s journey. The footage of the Baltimore biking phenomenon is mind boggling, and the freedom and power the sport offers its riders does not skip by without mention. You might even applaud these young men of West Baltimore for avoiding, at least on Sunday evenings, much of the lawbreaking commonly found in their neighborhoods. But the 12 O’clock Boys – named for their ability to pull their bikes so far into a wheelie that they look like the hand of a clock striking 12 – can hardly be considered law-abiding.

And as thousands of traffic laws are beaten to submission each weekend, Baltimore police find themselves in a tough situation. The law forbids chasing the bikers because of the danger a chase poses to the riders and to bystanders, but they’re all in danger enough with or without a cop chase.

Wisely, Nathan’s position is not to judge the riders, the cops, the environment or Pug. Rather, he opens up an unseen world of skill, bravado and hellish traffic, and lets us watch it through the eyes of a budding young man still weighing his limited options.