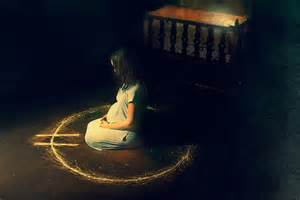 For the last few years, the first weeks of January have been littered with horror films. Last year it was Texas Chainsaw and Mama; in 2012, Devil Inside; in 2011, Season of the Witch (remember that piece of shit?!) and The Rite. What the correlation is between the bleak and miserable post-holiday winter and bleak and miserable films is hard to say, but 2014 continues the tradition with Devil’s Due, the second mediocre-to-poor horror flick of 2014.

It’s one of those found footage style films that follows newlyweds Sam and Zach through their first, unexpected pregnancy.

There are only so many ways a horror film can go with an unexpected pregnancy, the most common of which, like Devil’s Due, travels down Rosemary’s Baby Lane. So, you know in advance what terror lies ahead. At that point it’s up to the filmmakers to find new and interesting ways to generate those scares.

Ideas stolen from Rosemary, a smattering of Paranormal Activity films and scores of other, better movies are pasted blandly and unconvincingly together, with nary a jump, flinch or shudder to be found.

And do we seriously need two directors for this? Was there that much to do?

Devil’s Due is just another bad horror film, which means there’s little reason to explore cinematic integrity. And yet, here I go. The “found footage” approach in horror films is so, so tired that an actual artistic purpose for it rarely enters the picture anymore. In Blair Witch, someone discovered tins of film, and when those reels are watched, the mystery of three disappearances is revealed. In Quarantine, a newsman’s footage uncovers the terror of a hideous outbreak. In TrollHunter (if you haven’t seen it, you must), a TV news team receives and broadcasts footage shot of, well, trolls.

You see? If you have a found footage film, the footage has to be found at some point, explaining why we, the audience, are seeing it. Otherwise, the use of this technique is simply to avoid having to write a coherent story, provide character development or backstory, or learn the art of cinematography.

Far superior to the film itself, and much cheaper than a movie ticket, is the viral marketing video attached to it. Do yourself a favor and watch this (or watch it again) and skip the movie altogether.