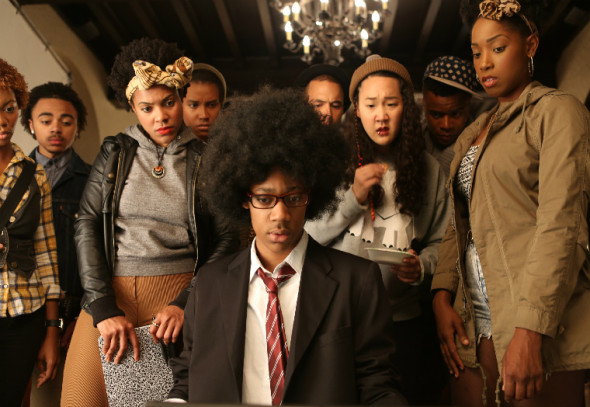 In case you’re not up on current events, we elected a black President (twice!), so that means racism in American is over.

That ridiculous notion lies at the heart of Dear White People, a 20 megaton smartbomb dropped by writer/director/producer Justin Simien. In a supremely confident feature debut, he takes on tough issues with a rapid fire mix of sarcasm, satire, outage, hilarity and disgust.

Meanwhile, the gay, introverted Lionel (Tyler James Williams from Everybody Hates Chris – also stellar) takes note of the waves Sam is generating, using the situation as his ticket to writing for the school’s major newspaper.

There’s much, much more going on at Winchester, culminating with this year’s theme for the annual Halloween bash:   “liberate your inner Negro!”

At times, the criss-crossing storylines take some overly convenient turns, the directing is light on style, and yes, the students are in class about as often as General Hospital doctors treat patients, but the film is always rescued by Simian’s whip-smart script.

He dissects countless black/white stereotypes, always staying one step ahead of the standard rebuttal. Even better, he sometimes throws purpose pitches, such as intentional contradictions that provoke the inevitably weak counterpoints he’s ready for, or a self-aware mention of being self-congratulatory.

It’s a glorious brand of honest, in-the-moment writing that is so elusive, you’re taken aback at how giddy you are at hearing it.

Dear White People is an entertaining, stimulating film that we need, badly.

Dear everyone:  go see it.