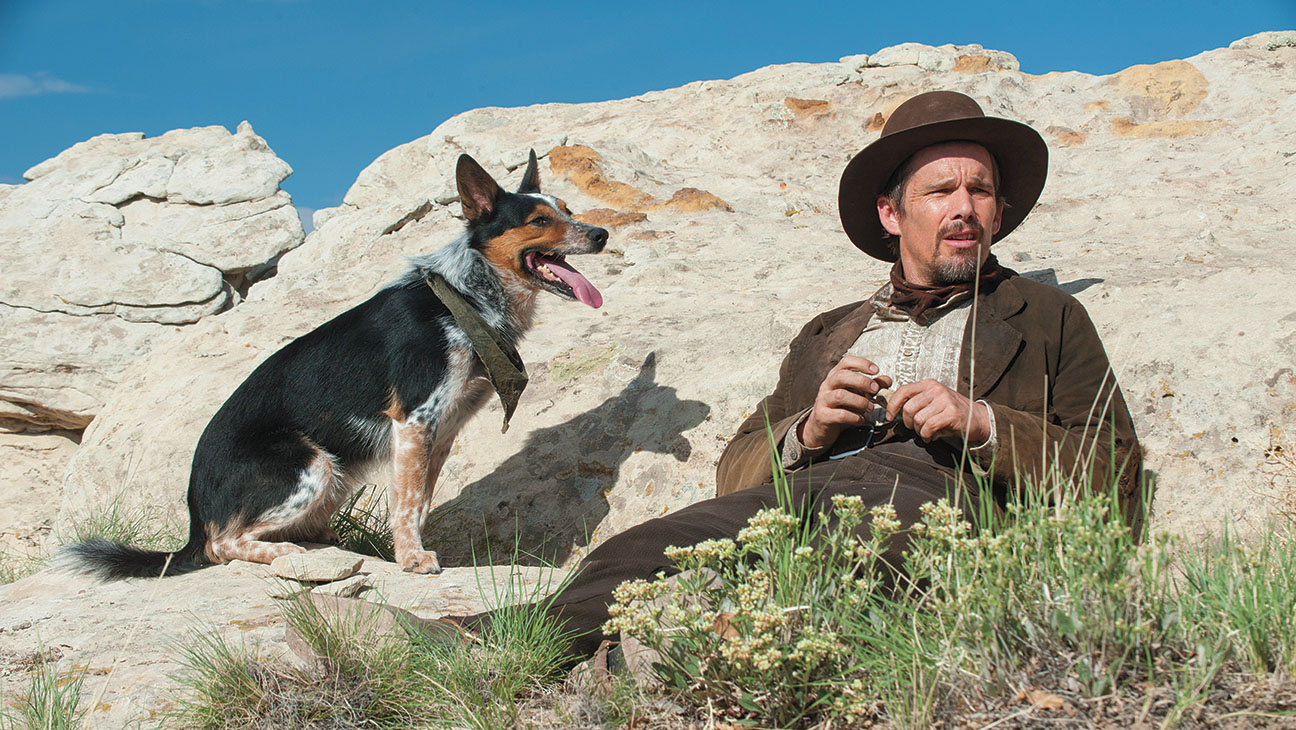 In A Valley of Violence

Paul (Ethan Hawke) just wants to make it to Mexico, and freedom. Unfortunately, a random and heart-wrenching act of violence detours him down a bloody path to revenge. Writer/director Ti West brings his experience in the horror genre to the Wild West, with surprising but refreshing reserve.

In a Valley of Violence benefits from West’s time in horror. The build is steady and slow. Paul transforms from quiet stranger to calculating killer, but all the blood is earned. The shootouts aren’t elaborate but they are grisly and realistic.

The camera work changes with Paul. A flashback is handled with a shaky cam and a flashlight. It feels like found footage, and though it’s a jarring stylistic change, it’s not unwelcome.

Another scene is shot from a single vantage point that makes the view feel like a security camera. The small room almost gets that fisheye quality, as Paul sneaks up behind an unsuspecting bather. These touches gently meld the horror and western genres, using cues from both to shape the viewers’ journey.

The performances are as realistic as West’s measured use of bullets and blood. Hawke is brooding and dangerous, but soft, too. His dog is an excellent device to extrapolate the way PTSD can function. Paul confidently banters with his dog, makes her promises, plots with her… but when he’s faced with people he keeps his mouth shut and his eyes low.

As the sheriff, John Travolta plays with equal restraint and mastery. He’s quiet but commanding, a good match to Hawke. As he devolves into panic, Travolta becomes funnier and more terrifying.

These performances from the two veterans balance out a younger cast of characters who are spoiling for adventure.

Karen Gillan shines with absurdity and humor, and she’s hard not to watch, even sprinting across the back of a shot. Taissa Farmiga is all wide-eyed wonder, but carries enough grit to make her character arc as compelling as Paul’s.

Most of the absurdity comes from a truly excellent Burn Gorman, as the priest. His drunken ramblings about sinners are bizarre, and showcase some of the best writing in the film. The priest’s appearances divide the film into three distinct parts, highlighted by Paul’s changing interaction with him each time. He serves as a beautiful device and a welcome, though momentary, release of pressure.

In a Valley of Violence is an homage to the traditional western with updates from the horror genre, not with blood, but with tension. Paired with a fantastic score from Jeff Grace and a cast that delivers, West has avoided the trappings of the modern shoot-em-ups and rejoined the classics with some fresh perspective.