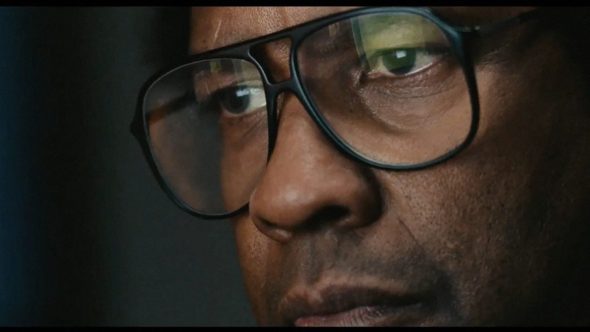 Roman J. Israel is a character. And Roman J. Israel, Esq. is a fine character study, one that can’t quite use that device for all the resonant insight it’s aspiring to.

Last time out, writer/director Dan Gilroy rode a very similar formula to spellbinding heights with the brilliantly slick and cynical Nightcrawler. Though Gilroy’s writing is often just as sharp in this legal drama, a third act buoyed by sentiment and idealism weakens the film’s overall effect.

Sustained. Of course, Washington is characteristically terrific as a savant-like attorney with decades fighting for civil rights amid the “dominant tendencies of society.” Slowly, he’s seduced by the dark side, succumbing to the high-rolling lifestyle that comes with working for the suave and successful George Pierce (Colin Farrell).

As Roman moves from one world to another, Gilroy rails nicely against the systemic inequalities of our justice system, with Washington’s seemingly effortless brilliance bringing the nuance needed to make Roman’s moral waverings feel authentic.

They do, and the film has a nice groove going until Gilroy needs to find himself and Roman a way out of what they’ve boxed themselves into. Suddenly scenes are feeling padded and resolutions a bit tidy, and you’re waiting for the dreaded grand courtroom speech that’s destined to torpedo all these good intentions.