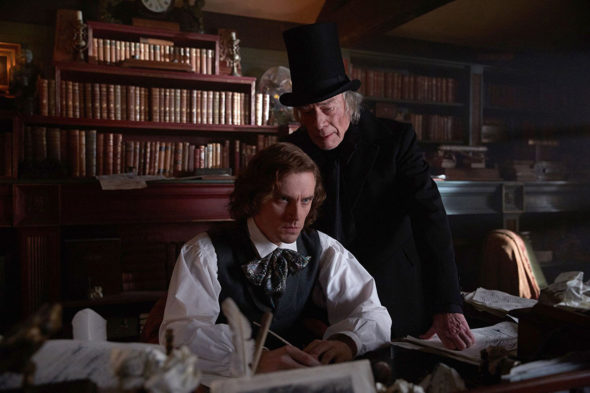 “Invented” might be an exaggeration, but Charles Dickens certainly gave the Christmas spirit a boost. Published less than a week before Christmas in 1843, his A Christmas Carol sold out in days, igniting an instant spike in charitable giving.

As the well-meaning but unremarkable The Man Who Invented Christmas points out, the soon-to-be holiday classic arrived under a looming publishing deadline, at a time when Dickens badly needed a hit.

Director Bharat Nalluri (Miss Pettigrew Lives for a Day) and screenwriter Susan Coyne (in her feature debut) adapt Les Stanford’s book with a mix of fantasy and biography, never making the commitment to either that might have elevated the film beyond merely pleasant holiday distraction.

As Dickens (Dan Stevens) searches for inspiration, it arrives in the form of Mr. Scrooge (Christopher Plummer). Their interactions, though often charming, only touch on the personal demons Dickens was exorcising through his tale of mercy and goodwill, and the film is too eager to trade darker edges for sustained wholesomeness.

The peeks we do get into Dickens’s life are worthy, the period setting effectively detailed, and the whimsy entirely likable. Though certainly no classic, file this one under “satisfactory.”