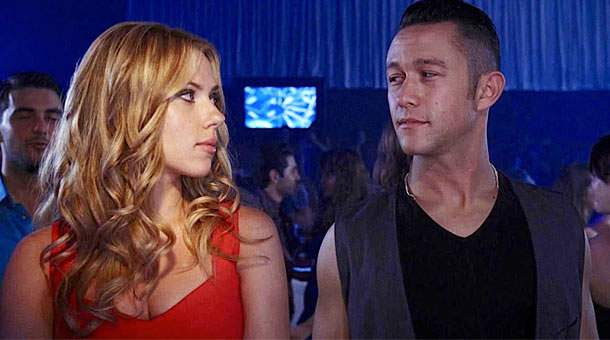 Look at little Tommy Solomon! Joseph Gordon-Levitt has proven himself a versatile actor in the years since his TV career in the guise of a pre-pubescent Earthling. With his newest effort, Don Jon, he exhibits surprising confidence and aptitude as both a screenwriter and a director.

Guess which one of those gets him into trouble.

Maybe the best way to appreciate what Don Jon is, is to quickly cover what it is not. Don Jon is not a traditional romantic comedy. It is not a sexy romp, or a perfect flick for hangin’ with your bros.

No. It’s a sexually frank, cleverly written, confidently directed independent comedy/drama about our culture of objectification. It’s an alert comment on a society that fears intimacy, collects trophies, and looks to get more than it gives; a culture that raises girls to want to be princesses, and guys to collect sexual conquests. A culture where a fast food restaurant honestly advertises its newest sandwich by having an oiled up, bikini clad super model spread her legs while she enjoys the tasty burger.

Writing and direction are nothing without a cast, and Gordon-Levitt proves just as savvy in that department. Tony F. Danza, ladies and gentlemen! Danza has fun as Jon’s role model father, while this season’s go-to girl Brie Larson – with barely a word – scores as his observant sister.

Gordon-Levitt’s own perfectly crafted swagger finds its match in a gum-chewing Scarlett Johansson, whose sultry manipulator is spot-on.

The fledgling auteur stumbles by Act 3 – quite a letdown after such a well articulated premise. The underdeveloped resolution would hinder the effort more were it not for the presence of Julianne Moore as the eccentric and wise Esther. The role may be a bit clichéd, but Moore is incapable of anything less than excellence.

It won’t be long before we’re saying the same of Joseph Gordon-Levitt. Until the end, he proves himself an insightful observer of his times, a cagey storyteller, and an artist with limitless potential.