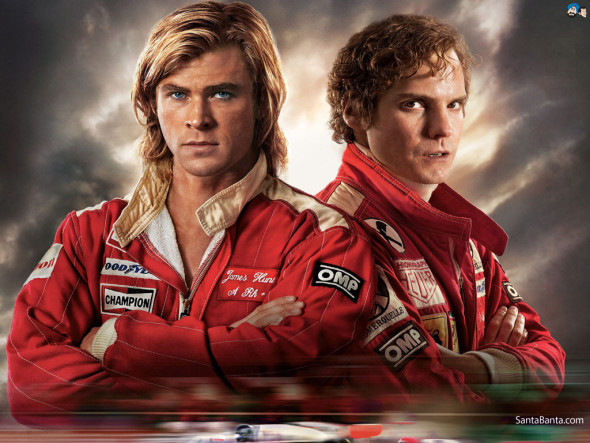 Yes, it’s clichéd irony, but here goes:  Rush, a movie steeped in the world of Formula One (F1) racing, excels because it downshifts, taking the time to examine the intricacies of a rivalry between two very distinct personalities.

Those two are James Hunt and Niki Lauda, legendary drivers who rose through the ranks together, ultimately waging an epic battle for the 1976 F1 championship. In the midst of that battle, Lauda suffered a near fatal accident, then subjected himself to the accelerated, painful rehabilitation needed to get back in the car before season’s end.

Rush is the latest in a line of historical dramas from veteran director Ron Howard, and thankfully, it’s one that favors the insightful subtlety of Frost/Nixon more than the overwrought melodrama of Cinderella Man.

That shouldn’t be a huge surprise. Oscar-nominated screenwriter Peter Morgan, who penned Frost/Nixon (as well as The Queen and The Last King of Scotland) delivers another thoughtful, character-driven script that supplies Howard with the sharp dialogue and wonderful themes necessary to develop the engrossing drama Rush ultimately becomes.

While Morgan again proves himself a master wordsmith, Howard displays a deft command of the pacing and camerawork needed to balance the human drama with the sports spectacle.

There are stories floating around that the film became a dual character study only because Howard didn’t have the budget necessary for all the racing he wanted to film. True or not, what matters is we get the best of both, with some truly pulse-pounding race sequences amid a faithful recreation of the international F1 scene during the swinging 70s.

Still, a  superior drama requires superlative lead performances, and Rush offers those as well. Chris Hemsworth (Thor) puts his charisma to good use, painting Hunt as the cavalier playboy who drifted through life looking for something, or someone, that could give him the high he got from his race car. Hemsworth’s looks and movie star status make him an easy choice for the Rush poster, but while his turn is strong, it his co-star who drives the film.

As Lauda, Daniel Bruhl creates a persona that becomes utterly fascinating, especially when pitted against his rival. While Hunt is raw talent, charm and bravado, Lauda is brainy, meticulous, blunt and socially inept. In a commanding performance that needs to remembered come awards season, Bruhl (Inglourious Basterds) makes an “unlikeable” character both sympathetic and compelling, drawing you into how Lauda views Hunt, and the world.

Exciting, enlightening, heartfelt and humorous, Rush flat out delivers, on all pumped-up cylinders.