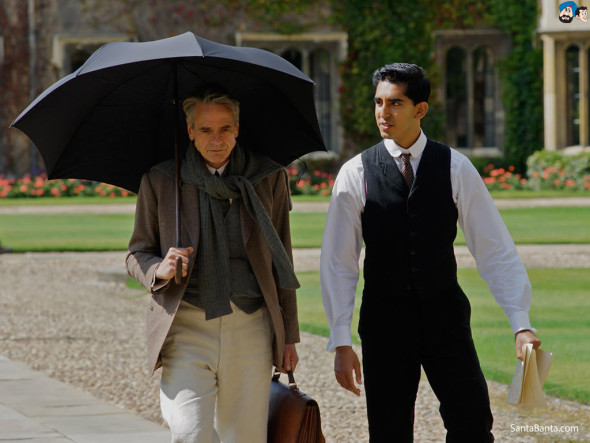 The Man Who Knew Infinity

If you think a movie about math can’t be thrilling, well, The Man Who Knew Infinity won’t prove you wrong.

Brown’s approach is certainly by-the-numbers, and a stifling respect for the subject hamstrings the effort. Ramanujan is never more than an utterly wholesome, godlike presence. A lead turn by Patel does nothing to burst through the clichés. As has been the case in each of his films, Patel’s performance is broadly drawn and lacking depth.

He isn’t given much to work with, truth be told. Brown’s screenplay offers little more than saintly suffering. Look how nobly he endures taunts, cultural misunderstandings, loneliness, illness!

The scenes at home in India are even more appallingly respectful, everything quaintly simple and yet admirable. It’s as if Brown distrusts the audience with any complexity or information on Ramanujan they might deem offensive. (Like, for instance, that his wife was a 10-year-old when they married.)

As Ramanujan’s Cambridge mentor G.H. Hardy, Jeremy Irons, of course, shines. A veteran of the melancholy Englishman role, Irons inhabits this academic with emotional rigor mortis, occasionally lapsing into the most charming flashes of vulnerability and ardor. The subtlety and sly tenderness of his performance suggests a longing that nearly revives the film from its terminal anemia.

A handful of supporting turns – Toby Jones, Jeremy Northam – almost add layers, but Brown’s screenplay relies so heavily on the rote of Traditional British Cinema that the film never gets the chance to breathe.

I’m willing to bet that Srinivasa Ramanujan was a flawed and fascinating person – geniuses so often are. Too bad Brown is content to see him as a romantic mystery.