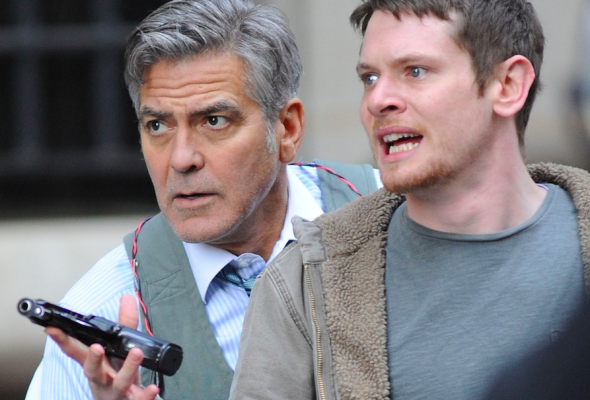 Hard to believe it’s been 7 years since Jon Stewart reduced CNBC’s Jim Cramer to a pile of mush on The Daily Show, taking him to task for a brazenly reckless attitude toward the consequences of overly confident stock tips.

Money Monster is built on the premise of Stewart’s outrage, as the desperate Kyle Budwell (Jack O’Connell) hijacks the set of a money management show and takes its high-flying host Lee Gates (George Clooney) hostage on live TV. Kyle was one of the countless investors burned by Gates’s confidence in Ibis Clear Capital, which somehow lost $800 billion overnight. Kyle wants answers, and confessions.

Director Jodie Foster sets up the hostage drama quickly, then does her best to effectively polish the frequently clumsy attempts at social commentary.

The closed-circuit communication between Gates and his trusted director Patty (Julia Roberts) keeps the standoff intriguing, but it never feels as if Gates is in any real danger. There’s little shading to Kyle’s sympathetic nature, and little doubt that Gates and Patty will take up his cause to root out the mystery of the $800 billion “glitch.”

The script, from a team sporting lowlights such as Dear John and National Treasure on its resume, seems more ready for prime time than the big screen. Its points about financial corruption and weak journalism are well-intentioned but already well known, and while the film doesn’t pretend there are easy answers, it tries to satisfy the need for them with a crowd-pleasing finale that falls into place much too easily.

There are moments, such as Foster’s handling of Kyle’s mid-standoff conversation with his girlfriend, that reach a nicely subtle level of humanity. The performances, Roberts in particular, are customarily solid and Foster’s direction is crisp, but Money Monster emerges as much too blunt an instrument.

It wants us to think it’s mad as hell, when it really just wants to entertain.

← Not Much Better in the Light
To Infinity, Not Beyond →
Scroll Up