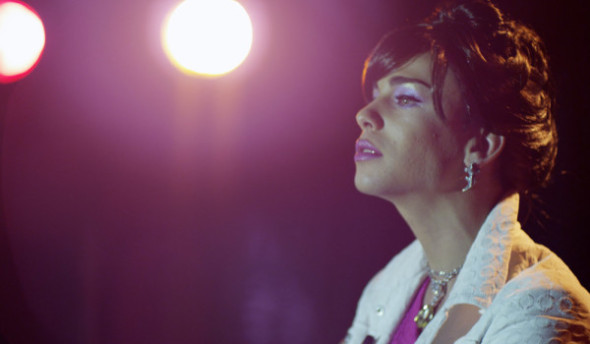 It’s fitting that Viva carries a subplot with ties to the boxing ring. The film is assembled with the familiar themes from any number of underdog sports movies, and overflowing with the heart needed to avoid drowning in cliche.

Much of that heart comes from the touching performance of Hector Medina as Jesus, a young man who works doing hair and makeup for a troupe of drag performers in Havana. Though he’s merely part of the crew, Jesus naturally dreams of the spotlight, finally getting his chance onstage as “Viva” when there’s a rare opening in the cast.

Viva’s first performance is met with a punch in the face from a man at the bar. That man is Jesus’s long lost father Angel (Jorge Perugorria – also terrific), a former boxer who’s only too happy to start crashing at Jesus’s place and dictating his life. These conflicts set by screenwriter Mark O’Halloran are obvious and formulaic, yet Viva sells them with charm and authenticity.

There’s never any doubt if Angel will come to accept his son’s lifestyle or if Viva will shine in the spotlight, but you gain a rooting interest anyway.

Early on, Jesus’s mentor at the club tells him any performance has to be more than just lip syncing, it has to “mean something.” Viva‘s tune is far from new, but the film does find a beautiful meaning within it.

← To Infinity, Not Beyond
High Society →
Scroll Up