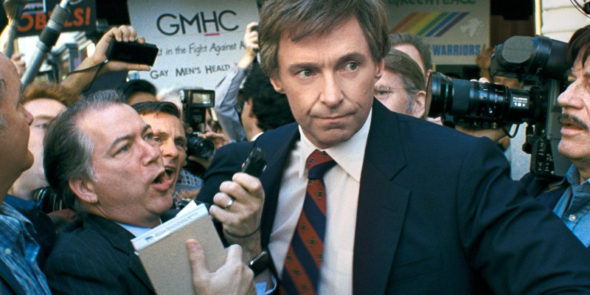 The Front Runner closes with Gary Hart (Hugh Jackman) dropping out of the 1988 Presidential race with a dire warning: Beware the day we elect leaders we deserve.

The film’s previous 110 minutes operate on the premise that day has come, pinpointing Hart’s very public fall from grace as the three watershed weeks that made it possible.

Hart, the Colorado senator who had been a surprise runner up to Walter Mondale for the 1984 Democratic nomination, emerged four years later as the assumed nominee and betting favorite to be the next President. But then, angered by questions about his marriage, Hart famously challenged the press to “put a tail on me, you’ll be bored.”

So they did, and they weren’t.

There was that yacht named Monkey Business (I swear, kids, look it up), the affair with Donna Rice, and damaging photos with another not Mrs. Hart. And before you could say “Dukakis” without laughing, we got President George H.W. Bush and a journalistic landscape that’s never been the same.

That’s more than enough meat for director Jason Reitman to chew on, and he gamely tries to balance all the ethical questions that remain startlingly vibrant today.

Should serious journalism embrace tabloid fodder? Are politicians entitled to private lives? Whose responsibility is it to hold powerful men accountable for their treatment of women?

Reitman, who also helped screenwriter Matt Bai adapt his own best seller All the Truth is Out, taps back into much of the groove that made his Thank You for Smoking such a mischievous treat.

The dialogue is fast and smart, often evoking a more easily digestible Aaron Sorkin. Salient points are made and then rebutted through the precise timing and intricate blocking of an outstanding ensemble (including greats such as J.K. Simmons, Vera Farmiga and Alfred Molina) that serves up indelible characters with relative ease.

Jackman is flat out terrific as the natural-born politician (“his hair alone is worth 6 points, 4 if it’s windy”) who could not, and would not, accept that the press were no longer giving men like him free passes.

Hart used his fame when it suited him and railed against its trappings when it didn’t. Jackman, in a thoroughly realized performance, is able to unveil this hypocrisy subtly enough to keep the authenticity of Hart’s political convictions uninjured.

The attention to narrative ebb and flow is detailed, becoming an absorbing dive into a historical clash of idealism, self-interest, and morality that seems almost quaint today. But strangely, it finds a depth that feels intentionally cautious, and the film never pounds a fist toward any viewpoint of its own.

Is that layup designed to encourage our own conclusions?

But Hart’s warning closes the film for a reason, and The Front Runner, much like the man himself, might have cut even deeper with more courage alongside those convictions.