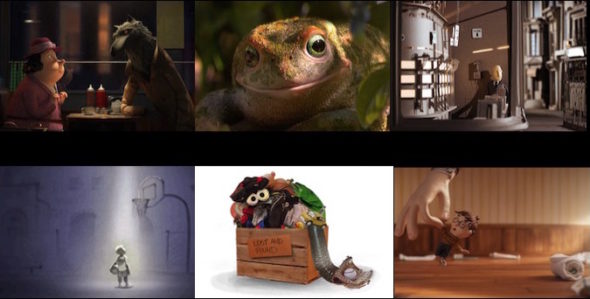 Pixar – the veritable Meryl Streep of this category – is here again, and deservedly the favorite to win more hardware. But some impressive frogs may spring an upset, while fractured fairy tales, a sports icon and emotional baggage round out a captivating program.

From a distance, Bryant’s love letter to his sport may appear self-serving, but when brought to life through graceful, impressionistic chalk animation and a John Williams score, it becomes more. Vanity project? That’s fair, but it’s also a sincere farewell from a complicated legend.

With Sam’s dad often leaving on business trips, father and son form a bond forged in a perfectly packed suitcase. The stop motion animation is arresting and well-played, setting fertile ground for the bittersweet emotions the film explores.

Look at you Pixar, charming us again with your gentle humor and effective poignancy. A cousin to the Toy Story universe, Lou finds a playground bully meeting his match, in a good way. It’s surprisingly touching, and, no surprise, the frontrunner of the group.

Based on the much-loved rhymes written by Roald Dahl and illustrated by Quentin Blake, Revolting Rhymes counters its somewhat bland animation with a talented voice cast (including Dominic West and Rob Brydon) to give famous fairy tales some new, sinister edges. Part one of a British TV double dip, it wanders off in spots but rallies at the finish.

In a deserted, well-appointed mansion, some amphibians explore their surroundings and follow their primal instincts to unexpected results. Practically bursting with wondrous CGI photorealism, this ambitious film – a graduation project from a French animation school – offers delight in every frame.

Also included in the program are these additional animated shorts:

Subscribe in a reader
← The Oscar Nominated Short Films: Documentary
You Can’t Punish in Here. This is the Red Room of Pain! →
Scroll Up