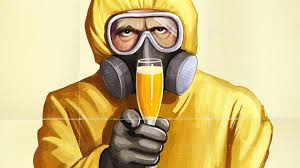 Our film opens on a black and white photo. Looks like it could be any grainy old shot of a vacation spot – palm trees, empty beach chair, water in the distance. As writer/director Todd Berger slowly pulls back, we eventually see the mushroom cloud beyond the water.

Sometimes a “couples’ brunch” can feel like the end of the world. I supposed that’s why it makes such a fitting location for Berger’s dryly hilarious It’s a Disaster!

The film follows Tracy (Julia Stiles) and her new beau Glen (David Cross) as they approach the site of Tracy and her buddies’ monthly tradition. It’ll be Glen’s first contact with Tracy’s BFFs, a set of self-absorbed thirtysomethings with their own very lived-in dynamic.

What begins as a comedy of manners (one that expertly showcases Cross’s abilities as a straight man) progress toward something grander.

The dark comedy comes rife with articulate jabs at couplehood, circles of friends, and the balance of harsh judgment and loving acceptance found therein.  Once the party realizes that the apocalypse is nigh – dirty bombs have been dropped in cities all over the nation, including the city center just 12 miles from their very brunch – those elements boil down to their most undiluted.

Berger’s concept is large but his handling is confident, and a likeable and well defined ensemble keeps the chaos interesting and the storylines crisp.

Cross’s warm, generous performance casts Glen as the one level head, the one good soul – the guy you want on hand when the world comes to an end. But Berger has more in mind for ol’ Glen, thankfully.

Stiles offers another strong performance (following last year’s ball-buster in Silver Linings Playbook). Meanwhile, America Ferrera gets the chance to show her humanity and comic timing while cooking up some X.

“The world’s about to end and you’re going to do extacy?”

“Can you think of a better time?”

Gallows humor is rarely employed so well, but Berger balances silliness with more insightful and biting comedy to mine his contrived situation for all its gold.

The quick 88 minute run time keeps the necessary claustrophobia from growing too tiresome, yet each character evolves believably. It’s a credit to Berger’s script and to the talent of the cast he’s assembled.

3 thoughts on “The End is Near! The Quiche is Cold!”