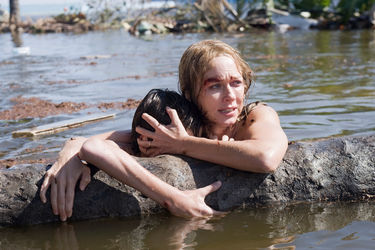 Out on DVD this week: the underseen, Oscar-nominated The Impossible. The sheer size of this movie feels impossible. Based on true events, the film follows a vacationing family of five torn asunder by Southeast Asia’s 2004 tsunami. Though an overwhelming score and a too-tidy ending threaten the film’s power, brilliant performances across the board – in particular, by Oscar nominee Naomi Watts – and a staggering recreation of the tsunami itself keep you breathless most of the time.

For a more fictional, but no less harrowing adventure, check out The Grey, a man-against-the-elements tale from early last year that also flew under the radar of most moviegoers.

Liam Neeson stars as an oil rigger who, while lucky enough to survive a plane crash, is then left to battle nasty weather and nastier wolves lurking in the Alaskan wilderness. Director/ co-writer Joe Carnahan has more in mind than just adventure, crafting an effective subtext of existentialism that makes it easy to forgive the moments of melodrama and the curiously weak wolf effects. Tense, gritty and intelligent, The Grey is an unexpected winner.
http://www.youtube.com/watch?v=VRWF4cepn8U