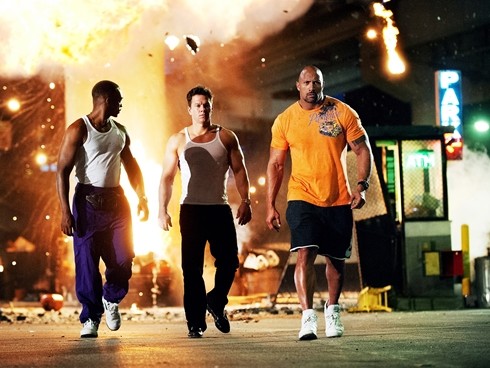 In fairness to director Michael Bay (did I just write that out loud?) turning a real life murder case into a comedy is not unheard of. Just last year, Ricard Linklater pulled it off with the delightful Bernie.

It can be done, but judging by Pain & Gain, Bay doesn’t know how.

The film is based on the exploits of two Miami bodybuilders currently sitting on Death Row. In the mid-1990s they  kidnapped and tortured wealthy businessman Marc Schiller until he signed away nearly all his fortune. They attempted to kill him as well, but even though he survived, Schiller struggled to get police to buy his story.

Thinking they got away once, the “Sun Gym Gang” eventually tried the scheme again, and two people died grisly deaths.

In the right hands, this story could become a dark, satirical comedy that uses the wretched excess of South Beach as a platform to skewer the misplaced values of a consumer culture run amok. The possibilities are there, but Bay doesn’t do nuance.

Instead, the gang is sympathetically portrayed as a group of bumbling clowns just taking a kookier path to the American dream. Ringleader Daniel Lugo (Mark Wahlberg) attends get rich seminars and calls himself a “doer” while roping the steroid-crazed Adrian Doorbal (Anthony Mackie) into his plans. For extra muscle, they recruit the gigantic Paul (Dwayne Johnson), a rehabbing, Jesus-loving ex-con character reportedly written as a composite of other real life gang members.

Wahlberg and Mackie are fine, Johnson’s growth as an actor continues to impress, and there is solid supporting work from Tony Shalhoub. All are hamstrung, though, by how their respective characters are conceived. Screenwriters Christopher Markus and Stephen McFeely (the Narnia series) hit a target that’s just a few “nyuk nyuks” away from the Stooges, which is a few miles away from where they should have been aiming.

Ironically, with all the slo-mo, voiceovers and onscreen text, you get the feeling Bay actually thinks he crafted a Natural Born Killers for a new generation.

Still, he’s trying, in his own misguided way, to say something here. That, along with the capable performances, is all Pain & Gain needs to stand as Bay’s best film to date.