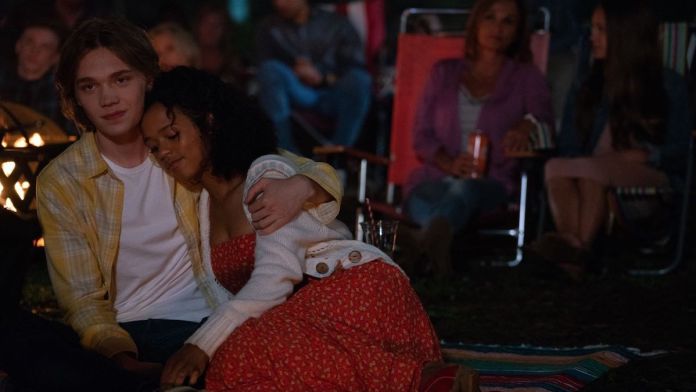 Look, I know Young Adult is not the only genre to lean on a familiar blueprint, but we’ve reached the point where finding any YA film without voiceover narration or an essay-reading finale is going to feel like gazing upon the golden wonders of Marcellus Wallace’s briefcase.

To be fair, writer Nick Naveda’s take on Julia Walton’s novel does at least try to develop an organic thread for the narration, as high schooler Adam (Charlie Plummer) talks to an unseen therapist about his struggles with paranoid schizophrenia.

Director Thor Freudenthal (Diary of a Wimpy Kid) manifests those struggles onscreen via three distinct characters (AnnaSophia Robb, Devon Bostick and the gloriously named Lobo Sebastian) whose voices are always lurking inside Adam’s head. It’s an early clue that the film’s handling of teen mental health will be an opportunity largely missed.

After a serious episode during class injures another student, Adam is expelled from his high school in the middle of senior year. On the upside, he’s accepted into a trial for a new schizophrenia drug, and into a prestigious local Catholic school which promises to be discreet.

Adam’s future plan to attend culinary college hinges on a high school diploma, which means Adam must make sure he a) takes his new meds, b) keeps his grades up, and c) passes a big exam which consists only of math questions and…..wait for it….an essay.

The obligatory tortured romance is between Adam and his math tutor, a classmate named Maya (Taylor Russell) who also has some secrets she’d rather not reveal.

And as with so many of these YA adaptations, all the narration and essay reading means the film is more tell, less show and nothing earned. Again, we get an invitation for teens to wallow in the angst of an inexperienced worldview simply by telling them what we think they want to hear.

Adam’s “you don’t understand me” posturing with his mother (Molly Parker), her new boyfriend (Walton Goggins, wasted) and an easygoing priest (Andy Garcia) serve only the manipulative and convenient use of Adam’s condition. Both Plummer (All the Money in the World) and Russell (Waves) have impressed before, but they’re given little chance to develop their characters into anything real or resonant.

All the familiar YA parts are here, and Words on Bathroom Walls keeps them comfortably close. But like those sentence-building magnets on the refrigerator door, just moving them around seldom leads to anything that makes much sense.