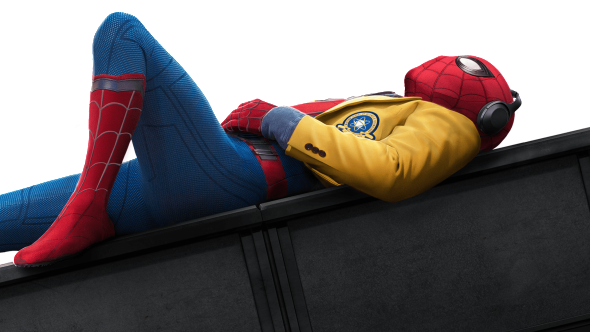 With brief but wildly enjoyable screen time, the newest Spider-Man (Tom Holland) introduced himself to us in last year’s Captain America: Civil War. His presence was energetic, light-hearted and fun – childlike. Appropriate for a high school freshman.

The events of Cap and Iron Man’s battle for control of the Avengers only months behind them, Tony Stark (Robert Downey, Jr. – like you didn’t know) takes arachnid-bitten science nerd Peter Parker under his wing.

Pete’s not ready for the big time yet, though. Mr. Stark would prefer his protégé focus on being a friendly, neighborhood Spider-Man instead of pestering for an invite to be the next Avenger.

There are several things director Jon Watts (Clown, Cop Car) and his enormous team of writers get right.

Firstly, they know we’re hip to Pete’s origin story, so the bite, Uncle Ben and all that needless angst are mercifully missing.

Next, they keep the story tight and low to the ground. It’s a training-wheels villain – somebody too big for you or me to contend with, but no intergalactic menace or god waiting to annihilate global humanity.

It also helps that said villain, the “Vulture,” is played by the reliably nutty and likeable Michael Keaton, who brings the perfect mix of psychosis and humanity to a role that could have easily been pushed over the top.

But mainly, Watts hits a bullseye with the film’s joyously entertaining tone.

As solid as the Marvel universe has been, it’s not hard to find moments (especially in Civil War) when the push for a hip chuckle undercuts the action. The humor in Homecoming hits early and often, but only to reinforce that the film’s worldview is sprung from a teenage boy. In this way, it feels more true to its comic origins than most in the entire film genre.

Holland, who just turned twenty-one, has no trouble passing for fifteen in a wonderfully wide-eyed performance. Paired with a nicely diverse group of classmates, Holland finds the perfect sweet spot to contrast the social minefields of high school with the learning curve of his new Stark Industries super suit.

Best of all, Holland re-sets the character to a place where its growth seems both unburdened and unpredictable. That’s exciting, and not just for Pete.

Same goes for the film. Watts and his writing team fill Homecoming with the thrills, wit and humanity (plus a plot twist that’s subtle genius) to give the entire superhero film genre a freshness that’s plenty welcome.

Throw in a letter-perfect final scene, and we’re already tingling about what Spidey might be up to next.

← This Dude Abides
The Snack that Smiles Back →
Scroll Up