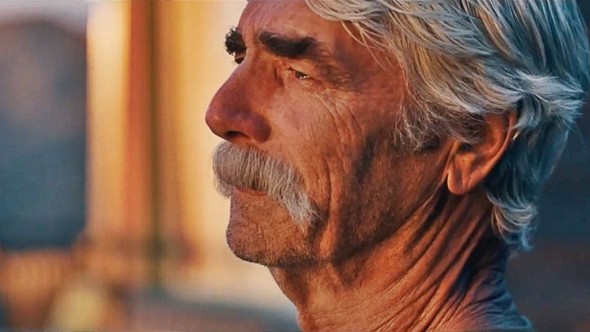 Somebody finally wrote a starring role for Sam Elliott. Let’s be honest, we all love him. What’s not to love? His lived-in masculinity, mannered charm and sonorous delivery make every line a comic/dramatic/romantic dream.

His latest film, the Brett Haley directed and co-penned The Hero, feels like an attempt to give Elliott his own The Wrestler or Crazy Heart.

I’m cool with that.

Haley was responsible for the 2015 life-renewing romance I’ll See You In My Dreams, a post-middle-age adventure starring Blythe Danner, with Elliott joining as her mustachioed gentleman caller.

With Hero, Haley places Elliott firmly in the lead of another “life begins when you decide it does” kind of story.

In a role undoubtedly written specifically for the actor, Elliott plays an aging performer who’s knocked around Hollywood for decades but is best known for his deep, cowboy voice. The film opens with that memorable baritone recommending, “Lone Star barbeque sauce – the perfect pardner for your chicken.”

It’s an inspired scene, full of humorous indignity and carried beautifully by the voice-over veteran. It’s really a shame Haley can’t build on it.

Elliott’s Lee Hayden has cause to reevaluate his life when a health issue, a lifetime achievement award, a viral video and a surprising new girlfriend all collide unexpectedly. Oh, so many reasons to contemplate your own mortality.

Elliott’s quiet, moseying way remains as enigmatic and charming as it ever has been, and seeing him play a character so very close to himself is sometimes eerie. Real-life wife Katharine Ross even plays his ex.

The film scores highest marks in two scenes with Ross, and in everything with a delightful Nick Offerman, playing against type as Lee’s goofy former co-star and current weed dealer.

It derails hardest, though, when it tries to juggle a distant relationship with a daughter (Krysten Ritter) and a new romance with a hot, much younger woman (Laura Prepon).

The Hero breaks no new ground. Had Haley and co-writer Marc Basch (who also co-wrote Dreams) thrown one or two fewer contrivances at us, or found perhaps a fresher way to contend with their obvious choices, they might have had something.

Instead they ride Elliott’s charm and settle for sentimentality, which is such a shame. It’s high time Sam Elliott gets to lead his own movie, but he deserves a little more than this.