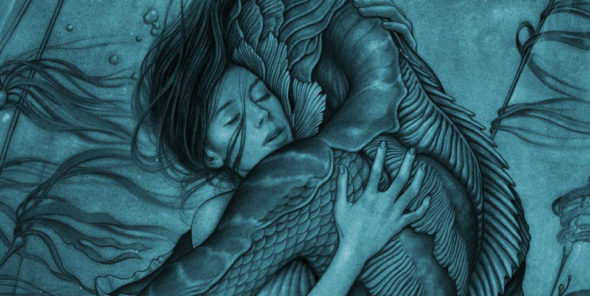 An unforgettable Sally Hawkins—an actor who has never hit a false note in her long and underappreciated career—gets her chance to lead a big, big show. She plays Elisa, a mute woman on the janitorial team for a research institute in Cold War era Baltimore.

Writer/director Guillermo del Toro is an overt romantic. So many of his films—Cronos, The Devil’s Backbone, Crimson Peak—swim in romance, but he’s never made as dreamily romantic or hypnotically sensual a film as The Shape of Water. And he hasn’t made a film this glorious since his 2006 masterpiece, Pan’s Labyrinth.

Del Toro favorite Doug Jones—Pan’s Pale Man and Hellboy’s Abe Sapien—gets back into a big, impressive suit, this time to play Amphibian Man. His presence is once again the perfect combination of the enigmatic and the familiar.

The supporting cast—Shannon, Octavia Spencer, Richard Jenkins and Michael Stuhlbarg—are among the strongest character actors Hollywood has to offer and del Toro ensures that they have material worthy of their talent. Each character is afforded not only his or her own personality but peculiarity, which is what makes us all both human and unique—important themes in keeping with the story. With Hawkins and Jones, they populate a darkly whimsical, stylish and retro world.

Characteristic of del Toro’s work, Shape of Water looks amazing. Its color scheme of appropriate greens and blues also creates the impossible truth of sameness within otherness, or the familiar with the alien.

The aesthetic is echoed in Alexandre Desplat’s otherworldly score and mirrored by Dan Laustsen’s dancing camera.

The end result is a beautiful ode to outsiders, love and doing what you must.