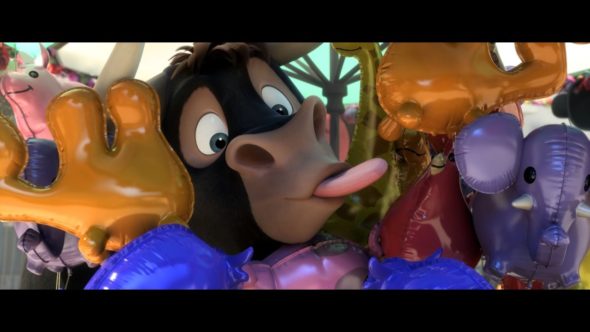 I’m thrilled to announce that Ferdinand, the new animated feature from Carlos Saldanha (Ice Age, Rio), did not ruin my childhood.

The story of a peaceful if enormous bull who’d far rather sniff flowers than fight matadors was my favorite book as a little kid, but to stretch these 32 or so sentences into a 90-minute feature-length film, there would have to be padding.

I worried about the padding.

Credit a team of six screenwriters for finding—for the most part—organic ways to develop the story. We meet Ferdinand as a young bull being raised with a handful of other bulls specifically to fight in the ring. Then we follow him on his adventure to freedom from the ring and back into the sights of the matador.

That doesn’t mean the film never feels padded. It definitely does. But a slew of vocal talents including John Cena, Bobby Cannavale and Kate McKinnon helps to keep the film afloat.

Rarely laugh-out-loud funny, a bit bloated and a tad dark at times, Ferdinand still manages to entertain. It looks good, bears a social conscience and remains more or less true to the simple “be who you are” core that made Munro Leaf and Robert Lawson’s picture book so lovely.

Subscribe in a reader
← The Screening Room: STAAAR WARS! (ALMOST) NOTHING BUT STAAR WARS!
Swimming in Romance →
Scroll Up