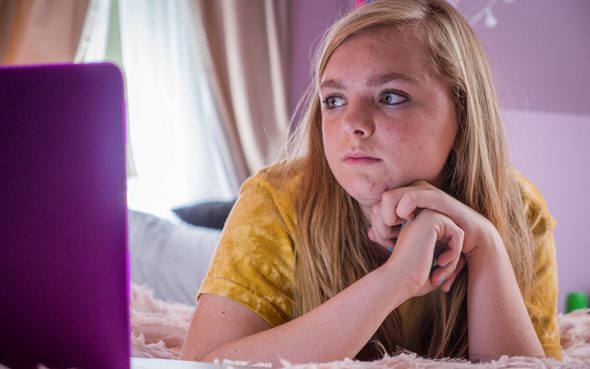 You can’t be brave without being scared.

That is an insightful comment, but when it’s delivered earnestly by a lonely, introverted 13-year-old determined to come out of her shell in the meanest of all worlds—middle school—it is a gut punch.

Who would have thought that the most truthful, painful, lovely, unflinching and adorable tween dramedy in eons would have sprung from the mind of 28-year-old comic Bo Burnham? Or that the first-time feature director could so compassionately and honestly depict the inner life of a cripplingly shy adolescent girl?

But there you have it.

Fisher (Despicable Me‘s Agnes, “It’s so fluffy!”) is Kayla, and we are with her, immersed in her world, for the last week of the eighth grade. God help us.

In Fisher, Burnham has certainly found the ideal vehicle for his story, but his own skill in putting the pieces together is equally impressive. Burnham’s as keen to the strangulating social anxieties of middle school as he is to the shape-shifting effects of technology.

This is the least self-conscious and most accurate portrayal of the generational impact of social media yet presented, and not just as part of the narrative. He uses social media as a storytelling device, whether the way the screen lights up the isolated face of a lonely teen, or the way the sound of the same girl’s YouTube videos narrate the very advice she wishes she were hearing from somebody.

He depicts both the normal that we all must tragically know, of being wildly out of your element even in your own skin, and the new normal that feels beyond bizarre. If your greatest ineptitude is human contact, how much harder to hone that skill when your only practice is in a virtual world?

Mercifully, Eighth Grade is not a cautionary tale about the dehumanizing dangers of an online world. It simply accepts that this is the world in which Kayla lives, depicting it as authentically and insightfully as he does a random lunch with the cool kids at the mall, or an unbearably awkward situation with a boy in a car.

Still, the best scene in the film—one that’s as uplifting as it is genuine—casts aside the glow of the phone for starlight and bonfire as Kayla and her dad, beautifully brought to life by Josh Hamilton, share a moment that will just fucking kill you.

Seriously, Burnham was never a 13-year-old girl nor has he ever been father to one. How the hell did he get all of this so insanely right?

← Sweeter Than Hunny
The Case For…A Quiet Place →
Scroll Up