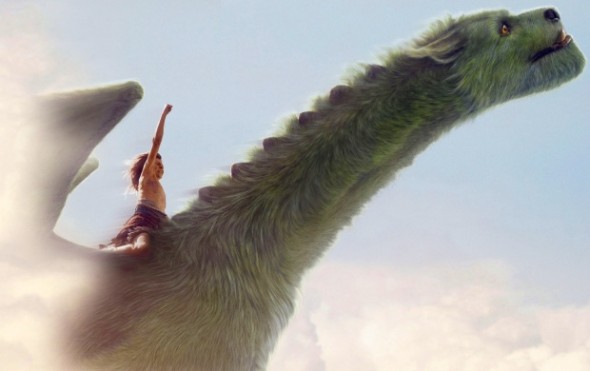 Just a few months after a triumphant re-imagining of The Jungle Book, Disney heads back to the vault to give Pete’s Dragon a similar live action/animation reboot…with less magical results.

Much has changed from the 1977 cartoon, starting with the surprisingly tragic depiction of how a very young Pete becomes an orphan. Losing his parents in isolated woodlands deep in the Pacific Northwest, Pete is promptly befriended  by the very dragon whose legend has been passed down for decades in local song and story.

Pete will call his dragon “Elliot.”

Well, we’re told it’s a dragon, but here he or she is more like a big, green dog with wings. Look at it chasing its tail and fetching a stick!

Six years later, park ranger Grace (Bryce Dallas Howard) encounters an injured Pete (Oakes Fegley) in the forest and takes him home, where stories of a dragon best friend intrigue Grace’s father Meacham (Robert Redford), who may have his own history with Elliot. These stories also catch the attention of local meanypants Gavin (Karl Urban), who quickly assembles a hunting parting with an aim to “put himself on the map” by bagging a giant green trophy.

Director/co-writer David Lowery makes a monster-sized pivot from the poetic desperation of his Ain’t Them Bodies Saints, and while Pete’s Dragon is rife with gentle sweetness, it’s lacking in both depth and wonder.

After the bracing prologue, characters and situations are broadly drawn, as if to never challenge any viewer older than Pete himself. It’s a curious approach for a PG-rated film, and the less than subtle, too often sappy treatment undercuts later attempts to resonate on a more metaphorical level.

Does Pete’s desire to stay with Elliot represent that wish to escape adult responsibilities and hold tight to childhood wonders? Maybe, but that Neverland remains out of sight.

We do get perfectly acceptable, albeit generically feel good lessons on the importance of family, and that’s fine. But despite those wings, Pete’s Dragon never quite soars.

Subscribe in a reader
← Yes, It’s a Weiner
Zappa Plays Zappa →
Scroll Up