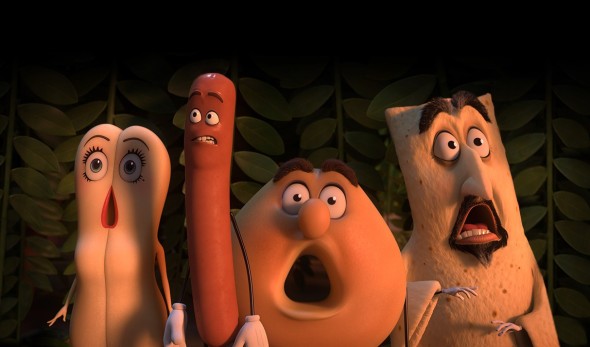 I was expecting to hate this movie. At worst I was anticipating a series of increasingly forced dick jokes and at best a munchie-induced fever dream. Instead, I gotta say, Sausage Party stands up with the South Park movie as a pretty offensively entertaining animated movie for adults.

The film is set in a Shopwell supermarket where every morning the products sing about their desire be chosen by “the gods”—those big things wheeling the carts—and travel to the Great Beyond (via a song composed by Alan Menken—the guy who co-created the songs from The Little Mermaid, Beauty and the Beast, and Aladdin).

Little do the foodstuffs know what terrors await them on the other side of the pneumatic doors. It’s not nirvana. The Gods fucking eat you.

As the Fourth of July approaches, Frank—a hot dog voiced by Seth Rogan—eagerly anticipates hooking up with his honey bun (Kristen Wiig) in the Great Beyond. But after they are chosen, they and a bunch of other products are separated from their packaging and fall to the supermarket floor.

Forced to traverse the enormous grocery, the fellowship has to navigate the aisles to get back to their packages, interacting with their fellow foodstuffs in various ethnic-food aisles, partying in the liquor aisle, and generally trying to evade the villain—a vampiric and increasingly unhinged literal douche.

The movie certainly employs a fair amount of wiener-based humor and a variety of food-centric ethnic stereotypes (for example, the sauerkraut jars are a bunch of fascists bent on exterminating “the juice”, the bagel’s voice is a Woody Allen impression, and a Peter Pan “Indian”-style pipe-smoking bottle of firewater dispenses wisdom), but the movie turns to a surprising exploration of faith vs. skepticism and the extent to which religious belief fosters divisions, hostility, and repressed sexuality.

Seeing Sausage Party ain’t a bad way to pass the time. But, for the love of God, please don’t take your kids.